WASHINGTON, Jan. 16 (Yonhap) -- Incoming U.S. President Donald Trump has reiterated his campaign accusations that many allies are free riding on American security commitments in an indication he could make good on his campaign pledges to pressure allies to pay more.

"A lot of these countries aren't paying what they're supposed to be paying, which I think is very unfair to the United States," Trump said of NATO allies in an interview published in the British newspaper Times and Germany's Bild newspaper.

There's five countries that are paying what they're supposed to. Five. It's not much," Trump said.

Trump also said NATO is "obsolete," but the alliance still is "very important to me." 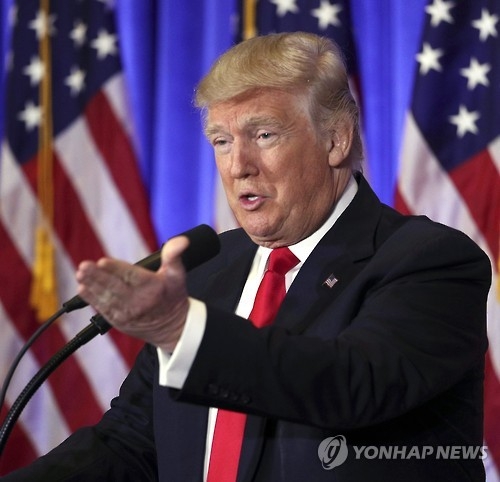 Since his election, however, Trump has shown signs of retreating from the campaign rhetoric, making remarks reaffirming the alliance with South Korea and filling some key posts with people valuing the alliance, such as Incoming Defense Secretary James Mattis and National Security Advisor Mike Flynn.

Last week, Rex Tillerson, the nominee for secretary of state, also said allies should do their parts.

"We cannot look the other way at allies who do not meet their obligations. This is an injustice not only to us but to longstanding friends who honor their promises and bolster our own national security, such as Israel," Tillerson said during his confirmation hearing.