SEOUL, Jan. 17 (Yonhap) -- GM Korea Co., the South Korean unit of U.S. automaker General Motors Co., introduced the all new Chevrolet Cruze here Tuesday, calling it the first of its kind in what it said will be a brand new segment of semi-mid size cars.

The new Chevrolet Cruze has the longest body among all compact cars, while its design and performance will make it a premium sedan that will upgrade the entire segment of compact cars to the next level, the company said in a press release. 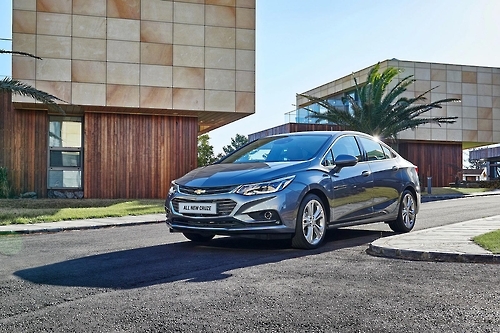 "The all new Cruze is built and designed on a completely new architecture... We wanted this vehicle to go beyond the boundaries of the compact segment," Stuart Norris, managing director of GM Korea's design team, said at a media event held here in Seoul.

Dale Sullivan, vice president of GM Korea for vehicle sales, service and marketing, said the car will not only become the No. 1 selling car in the C or compact segment, but also attract buyers from the D or midsize segment and the small SUV segment.

"This will be our hero product of the year. It will redefine the segment and go to the upper end of the segment. This car won't only compete in the compact segment and the D-segment. It will also attract SUV buyers," he said.

James Kim, president and CEO of GM Korea, said the all new Cruze will help keep his company's sales growing this year, adding he was confident that it will reach a double-digit market share in the South Korean market for the first time in 10 years.

"I believe we will do better in 2017 than we did last year," he told reporters.

In 2016, the carmaker sold 180,257 cars in the South Korean market, marking a 13.8-percent on-year spike and accounting for 9.9 percent of all vehicles, including imported cars, sold here. 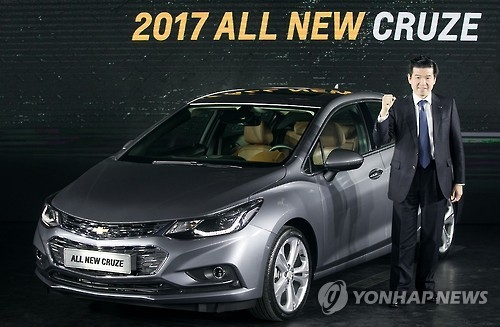 The first new Cruze in nine years comes with GM's latest and most advanced technologies that make it one of the lightest and most efficient cars available.

Its 1.4-liter turbo engine produces maximum horsepower of 153 and 24.5 kg-meter torque, and has an average mileage of 13.5 kmpl, one of the highest for vehicles in its segment, according to GM Korea.

Up to 74.6 percent of the car's body is made of advanced steel, including 21 percent made of press hardened steel, making it one of the safest cars.

Also, various safety and convenient features, such as the side blind spot alert system and advanced parking assist system, make the car one of the safest vehicles in all segments, the company said. 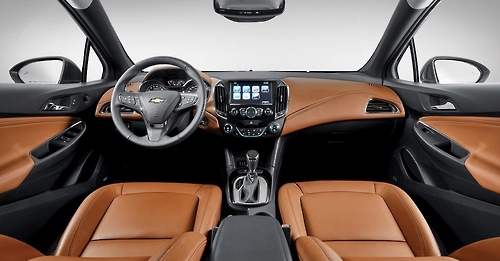