LG Household & Healthcare, Korea Zinc and Hyundai Heavy Industries Co. were among their top picks as well, the data showed.

Samsung Electronics saw its stock price surge 43.02 percent last year in the face of the heavy sell-off by foreign investors as its earnings were better than what the market had expected despite a global recall of its flagship smartphone, the Galaxy Note 7.

Samsung Electronics estimated that its fourth-quarter operating profit last year may have jumped about 50 percent on-year, beating market expectations as strong sales of chips and displays appeared to help offset losses from the production halt of the Note 7.

Operating profit is estimated at 9.2 trillion won in the October-December period last year, up 49.84 percent from the same quarter of 2015.

Foreign investors held local stocks worth 481.6 trillion won in total at the end of last year, with their portion against the market cap rising by 2.6 percentage points to 31.2 percent, according to the data. 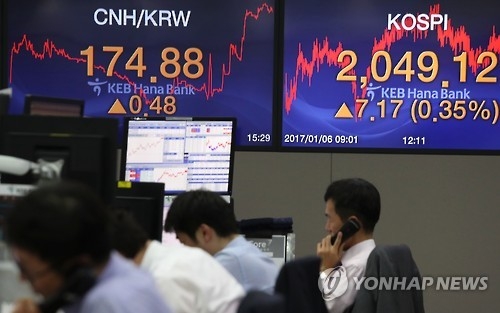 AmorePacific, SK hynix, POSCO most favored by foreign investors in 2016

AmorePacific, SK hynix, POSCO most favored by foreign investors in 2016