SEOUL, Jan. 17 (Yonhap) -- The head of cash-strapped Daewoo Shipbuilding & Marine Engineering Co. was questioned by prosecutors Tuesday over allegations the company cooked the books to cover up its losses.

Jung Sung-leep, 66, appeared before the Seoul Central District Prosecutors' Office as a suspect on charges of violating the Act on External Audit of Stock Companies.

Jung, who took office in May 2015, is suspected of ordering the company to underreport some 120 billion won (US$101 million) in business losses that year, despite his original pledge to break away from the past and to run the company transparently.

Ko Jae-ho, who headed the company from 2012 to 2015, is awaiting a court's ruling Wednesday over allegations he overreported some 5.7 trillion won in net assets between 2012 and 2014.

Song quit the newspaper in August last year after the allegations surfaced. 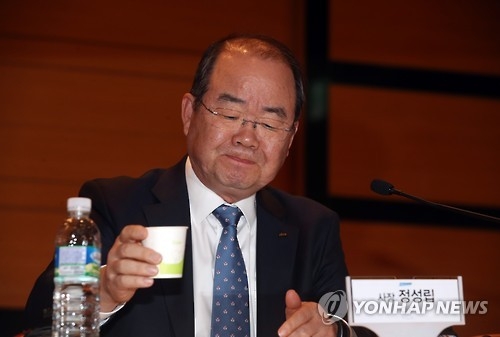