SEJONG, Jan. 17 (Yonhap) -- The South Korean government on Tuesday endorsed a plan to spend an additional 168.7 billion won (US$142.2 million) to support local farmers who have been suffering from massive losses stemming from the worst outbreak of avian influenza in the country, the finance ministry here said.

The government earlier came up with a program to give 237.3 billion won in subsidies to poultry farms since the first avian influenza case was reported in the country on Nov. 17, 2016. So far, more than 30 million chickens and ducks have been culled.

Some 68.6 billion won has already been paid, and the Cabinet approved to spend the remaining 168.7 billion won.

"The subsidies are expected to help the damaged farms stay afloat," the finance ministry said. "The government will speed up all procedures to have the farms receive the money as soon as possible before the Lunar New Year's holiday."

This year's Lunar New Year's Day falls on Jan. 28, and will be part of a four-day holiday. 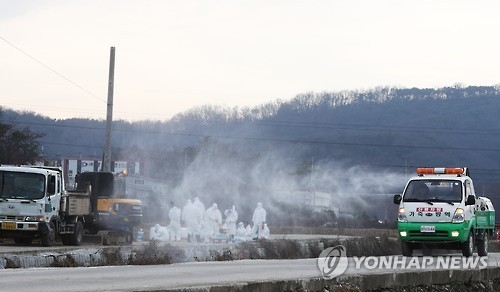