SEOUL, Jan. 17 (Yonhap) -- South Korean retailers' business sentiment plunged to the lowest in four years in the first quarter of the year, affected by a protracted slump in domestic demand and the implementation of an anti-graft law, data showed Tuesday.

The retailers' business sentiment index stood at 89 in the January-March period, the lowest since a reading of 81 was posted in the first quarter of 2013, according to the data compiled by the Korea Chamber of Commerce and Industry (KCCI).

The data were based on a survey of 1,000 retailers in Seoul and six other largest cities.

A reading of under 100 means pessimists outnumber optimists.

Large-scaled retailers, convenience stores and department stores painted a gloomy picture of their business down the road, while Internet shopping malls and home shopping operators offered a relatively rosy outlook for their business, the survey showed.

They expected a slowdown in sales and increased competition, which will lead to a drop in their profitability. Tight cash flows and increased regulations were also cited as key risk factors for their business, it showed.

Last week, the Bank of Korea, the country's central bank, cut its economic growth forecast for this year to a growth of 2.5 percent, from 2.8 percent projected in October, citing a slump in domestic demand.

The BOK said the South Korean economy could continue its moderate growth this year driven by improving exports and facility investments, though it said private consumption and construction investment will remain weak throughout the year.

The quarterly revision by the BOK also came amid political uncertainties following the parliament's impeachment of President Park Geun-hye over a corruption scandal involving her confidante. For the whole of 2015, the economy grew 2.6 percent, much lower than the 3.3 percent growth the BOK forecast a year earlier. 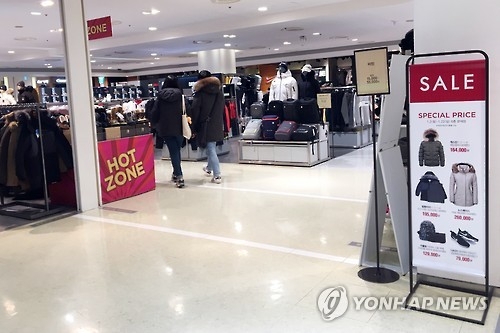