The event on Monday featured a red carpet entrance of numerous stars, including the two idol singers who posed for photos and cheered for the film's success.

The homegrown movie, starring actors Jo In-sung, Jung Woo-sung, Ryu Jun-yeol and Bae Seong-woo, unravels the story of Tae-soo, played by Jo, who becomes a prosecutor in order to wield absolute power. In the process, he takes advantage of a senior prosecutor, the puppetmaster behind the country's politics, and his friend who is a gangster. Jung plays the senior prosecutor and Ryu the gangster.

The film is set to reach local theaters on Jan. 18. 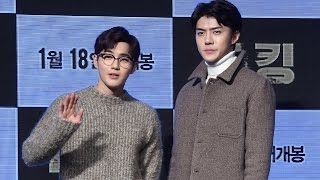