SEOUL, Jan. 17 (Yonhap) -- Thae Yong-ho, a former Pyongyang diplomat who defected to Seoul last year, said Tuesday that North Korea is not a communist country but only a slave society based on hereditary succession.

Thae, former North Korean minister to Britain, also claimed Kim Jong-un's ambiguous link to the so-called Mount Baekdu bloodline, which helps reinforce the legitimacy of the Kim family's three-generation succession, will be a critical weakness for the incumbent regime.

"There is a concept of proletarian dictatorship in the communists' ideology, and Kim Il-sung and Kim Jong-il justified their autocracy through such an idea," Thae said during the conference hosted by the planned Bareun Party, a splinter group from the ruling Saenuri Party.

"However, today, the concept of proletarian dictatorship has disappeared in North Korea. It has instead become a single gigantic slave society that exists only for the hereditary succession of the Kim family."

Thae then said Kim Jong-un is facing challenges as he did not have enough time to prepare for the power succession like his father. 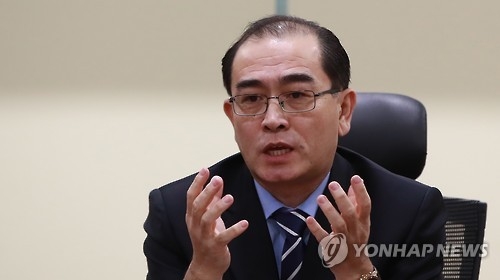 N. Korea is slave society based on hereditary succession: defector

N. Korea is slave society based on hereditary succession: defector