SEOUL, Jan. 17 (Yonhap) -- The amount of banknotes currently in circulation in South Korea has reached nearly 100 trillion won (US$84.4 billion), the central bank said Tuesday, due to the bank's easing stance to bolster growth in Asia's fourth-largest economy.

Outstanding banknotes refer to actual bills in circulation and are different from cash in circulation, which partly reflects market liquidity.

The BOK attributed the rise in the amount of banknotes in circulation to increased issuance of 50,000-won bills.

Last year, the BOK issued 23 trillion won worth of 50,000-won bills in the largest amount since 2009 when South Korea began to print the highest denomination bill.

Outstanding 50,000-won bills accounted for the lion's share with 75.8 trillion won as of the end of December, up 11.5 trillion won from a year earlier.

The BOK said outstanding 10,000-won bills stood at 16.2 trillion won as of the end of December, down 1 trillion won from a year earlier.

It said the so-called money multiplier -- which gauges the maximum amount of commercial bank money that can be created using central bank money -- fell to an all-time low of 16.7 in November.

The BOK has kept the country's key rate at an all-time low of 1.25 percent since June last year to help support the economy.

Meanwhile, the turnover rate of demand deposits recorded 20.3 in November, compared with 19.4 from a month earlier.

The rate is calculated monthly based on the amount of withdrawals and the average account balance. Less turnover means fewer withdrawals, signaling that people are holding on to their cash instead of spending or investing.

The development illustrated that political uncertainties and concerns about the slowing economy are heavily weighing on consumer sentiment.

Last month, the parliament impeached President Park Geun-hye over a corruption scandal involving her confidante. The Constitutional Court is set to determine whether to uphold or overturn the impeachment by early June. 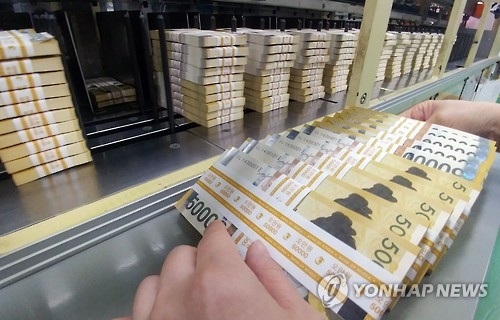