(ATTN: UPDATES throughout with details of hearing; CHANGES headline)

SEOUL, Jan. 17 (Yonhap) -- Choi Soon-sil, the woman at the center of a South Korean presidential impeachment scandal, clashed with a niece Tuesday over allegations they coerced Samsung Group into making donations to a sports foundation under their control.

Choi, her niece Chang Si-ho and former Vice Culture and Sports Minister Kim Chong were summoned to the Seoul Central District Court to testify on allegations they colluded to extort more than 1.6 billion won (US$1.35 million) in donations from the nation's largest business group to the Korea Winter Sports Elite Center, which was established in June 2015.

Chang early on admitted that they forced the donations from Samsung and that she embezzled funds from the center. Her admission came a day after special prosecutors investigating the scandal sought an arrest warrant for Samsung heir Lee Jae-yong on charges of bribery.

According to the prosecutors, Lee was involved in Samsung's decision to give up to 43 billion won to various organizations linked to Choi in return for the Park Geun-hye administration's backing of a merger between two companies belonging to the conglomerate in 2015.

President Park was impeached last month on suspicion of colluding with Choi, her close friend and confidante.

"(Choi) asked (the former vice minister) to help the center, but she did not collude with Chang or abuse power," her lawyer said. "She asked former Vice Minister Kim to look into corporate donations related to the center's management, but she did not specify certain companies or make them do anything beyond their obligations."

Choi has been charged with abuse of power, attempted fraud and coercion. During the hearing, her lawyer also claimed the center was under the full control of Chang.

Kim also denied his involvement. His lawyer argued the donations were a decision made by the presidential office and Samsung's management. 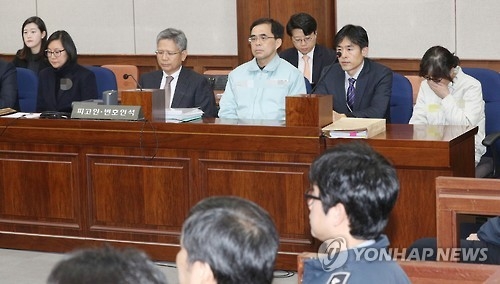