The ballad track, released on Sunday, includes self-composed lyrics such as "You are my greatest happiness" that convey the singer's deep feelings towards Kim.

The finger-snapping, piano-led ballad marks the 34-year-old singer's long-awaited return to the music scene after a three-year hiatus. Rain once again proves his prowess in singing and dancing as he appears classy and refined in a fedora with choreography incorporated from modern dance.

The music video also portrays Rain's established position as a singer as he stages a solo performance in the first half of the song without the aid of any backup dancers, fancy stage lighting or powerful beats to make up for any possible loopholes.

The song has attracted more attention as the international icon Psy of the global hit song "Gangnam Style" spearheaded the song's overall production.

Rain and Kim Tae-hee met each other at a TV commercial set in 201l and officially started dating in fall of 2012. 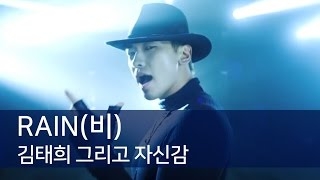