JINDO/GIMHAE, South Korea, Jan. 17 (Yonhap) -- Former U.N. Secretary-General Ban Ki-moon, a prominent presidential aspirant, visited the grave of a former liberal leader in the southern city of Gimhae as part of his nationwide tour to build grassroots support ahead of a key election this year.

Ban paid homage to late President Roh Moo-hyun at his grave in Bongha Village in the city, 449 kilometers south of Seoul. Since Roh's suicide amid a corruption probe in 2009, the village has become a symbolic pilgrimage site for liberal politicians.

"President Roh Moo-hyun's words and leadership have remained in the minds of citizens," Ban told a throng of reporters after visiting the grave and Roh's wife Kwon Yang-sook.

"I still have the vivid memory of Roh shouting messages of change, integration and reform during his inauguration ceremony (in 2003)." 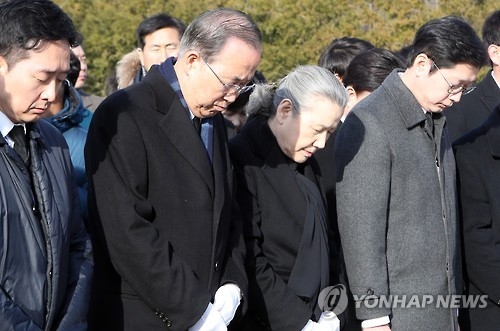 Ban, a former foreign minister from 2004-2006 during Roh's presidency, also stressed the need for a "change in politics," a phrase he has used in an apparent swipe at establishment politics long embroiled in partisanship, factionalism and persistent ideological feuds.

"Roh's mention of a change in politics has also been deep inside our hearts," he said. "Now, we have to pursue politics in which citizens take center stage. We should refrain from engaging in the kind of life-or-death political struggle only to grab power."

His visit to the village came amid his aggressive drive to connect with ordinary citizens across the political spectrum under his mantra of national integration, and squelch concerns that he has been out of touch for too long.

Ban has yet to officially declare his bid for the country's top elected office. But he has repeatedly signaled his strong presidential ambitions, vowing to use his 10-year experience as the U.N. helmsman to help advance his home country.

During a meeting with Roh's wife Kwon, Ban expressed his appreciation for Roh helping him win the election as the U.N. chief.

"President Roh made a lot of efforts to help me become the U.N. secretary-general," he said. "I am deeply moved as I have returned to my home country after a decade (of my service at the international organization) and exchanged greetings with you."

Kwon congratulated Ban on his successful completion of his mission at the U.N., Ban's aide told reporters.

Later in the day, Ban traveled to Paengmok Port in Jindo, South Jeolla Province, near the site of the 2014 ferry disaster that left more than 300 passengers, mostly young students, dead or missing.

Ban met with the victims' families and offered his words of solace.

"Had the government responded more effectively and rapidly, we could have been able to save more lives," Ban told the families. "I will make my best efforts when I get the opportunity to meet with other political leaders (to address your issue)."

Victims' families have demanded a more thorough probe into the tragedy, berating the government for its failed response to the deadly incident.

During his visit to Jindo, Ban encountered a group of anti-government protesters, but no serious scuffle occurred. 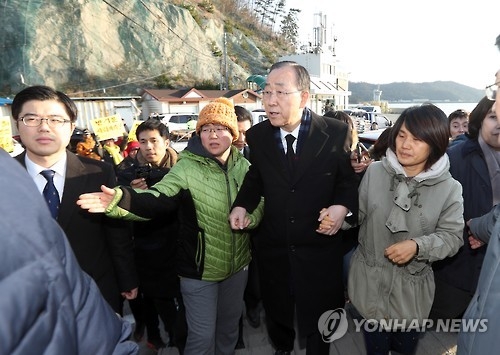 On Wednesday, Ban is to visit the May 18th National Cemetery in Gwangju and a traditional market that was recently gutted by a fire in Daegu.

His ongoing campaign to court citizens has unnerved his political rivals and foes, vowing to carry out rigorous ethics vetting for Ban.

"It may be easy to speak about a change in politics. But citizens will be disappointed if he fails to show it through action," Rep. Woo Sang-ho, the floor leader of the main opposition Democratic Party, said during a meeting of party officials.