SEOUL, Jan. 17 (Yonhap) -- South Korea's No. 2 automaker Kia Motors Corp. launched its All New Morning minicar on Tuesday, setting a clear goal of retaking the title of best-selling minicar in the country.

"The All New Morning offers the best quality in terms of space, convenience, safety and economy that exceed those of all other cars in its segment," Kia Motors President Park Han-woo said in a press event marking the launch of the vehicle. 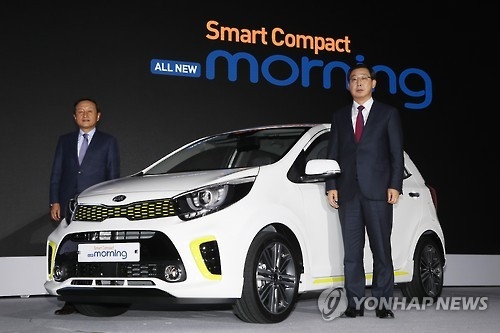 The annual sales target, if reached, will be about 7,000 units higher than the 78,035 of the Chevrolet Spark sold in the local market last year, becoming the best-selling minicar here.

Already, some 4,000 preorders have been placed for the first refreshed version of the Morning in six years, according to company officials.

The new Morning comes with a new 1-liter Eco Prime gasoline engine that produces 75 horsepower and has a fuel economy of 15.4 km/l, up 5.9 percent from that of its previous model, the company said. 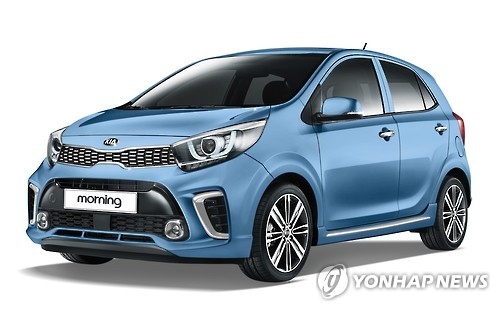 The brand new Morning also has a new look.

The next-generation Morning appears to be bigger and "more confident" than earlier models, while it also has a new stylish outlook with a design that is meant to highlight even the smallest detail and characteristic of the car, its manufacturer has said.

In terms of safety, the carmaker said the All New Morning will certainly be one of the safest in its segment, noting the proportion of advanced high-strength steel in its body has doubled to 44 percent from 22 percent in earlier models.

It is also the first vehicle in its segment to be equipped with a vehicle stability management system, which helps maintain the vehicle's stability by detecting or reducing loss of traction.