"There has been no contact with Japan since it announced a halt to ongoing negotiations," Song In-chang, deputy finance minister for international affairs, said in a media briefing in Sejong, the country's administrative city. "Japan has to return to the table first. We will not ask Japan for the resumption of a currency swap."

Earlier, the Tokyo government broke off the negotiations with South Korea to reopen the currency swap deal, citing Seoul's recent move to let the statue symbolizing the victims of Japan's wartime sexual slavery be installed near its consulate in the southern port city of Busan.

The finance ministers from the two countries in August last year agreed to resume the talks after a US$10 billion bilateral currency swap agreement that had been maintained since 2001 expired in February 2015.

A currency swap is an arrangement between two countries to exchange one currency for another at a specific rate of exchange in a bid to use the powerful foreign currency to soothe volatility in the local currency market.

At that time, the finance ministry expressed regret over the decision which was affected by political and diplomatic issues.

"The bilateral economic and financial relationship is based on separation of political and economic affairs," said Deputy Finance Minister Song. "What we fear most is that political issues will impose a constraint on economic relations with Japan in the future."

Also, many are worried that a separate currency swap agreement with China is in danger due to rising political and diplomatic tensions surrounding the deployment of a U.S.-led missile system.

Beijing is strengthening its anti-Korean movements against South Korean businesses in retaliation for Seoul's plan to deploy the Terminal High Altitude Area Defense (THAAD) on its soil.

"We can't rule out any possibility that the deal would not be extended, although the two sides have reached an agreement on an extension," said Song. "We are making all-out efforts to ease uncertainties and extend the deal as scheduled."

Last year, South Korea and China agreed to extend the swap agreement which is scheduled to expire in October 2017. The deal was first initiated in 2009 with a value of 32 trillion won (US$27 billion) and expanded to 64 trillion won in 2011. 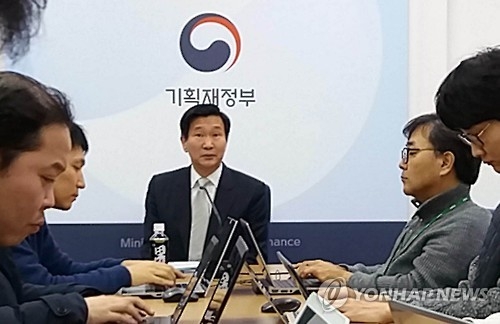