SEOUL, Jan. 17 (Yonhap) -- South Korea's Acting President and Prime Minister Hwang Kyo-ahn on Tuesday reassured foreign diplomats based in Seoul that the country will "unwaveringly and consistently" manage state affairs despite the impeachment of President Park Geun-hye over a corruption scandal.

Hwang made the remarks during a meeting with more than a dozen foreign ambassadors in Seoul, an event that his aides said was intended to underscore his commitment to maintaining foreign policy consistency.

"The Republic of Korea is a country that has come to where it stands now after having tided over countless challenges," Hwang said. 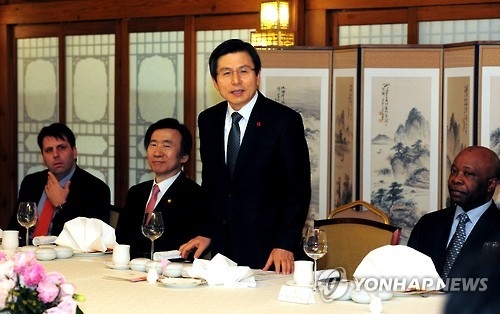 "(Our country) will wisely overcome the current crisis while unwaveringly and consistently managing state affairs, and I call on you to support our steadfast policy efforts," he added.

The event marked his first meeting with the top envoys representing major partner countries such as the United States, China, Japan, Russia, Australia and Germany, since he took over on Dec. 9 after Park was impeached by parliament over the scandal.

The meeting came while Seoul is struggling with a series of diplomatic challenges including growing friction with China over the planned deployment of a U.S. missile defense system to the peninsula and a rekindled row over Japan's wartime sexual slavery.

During the meeting, Hwang reiterated that Seoul, in tandem with the international community, would seek to change Pyongyang's "strategic calculus" about its nuclear and missile programs through strong sanctions and pressure.

"The Seoul government will protect its nation and people's safety from North Korea's nuclear and missile threats and provocations," Hwang said. "We will also continue to value our role as a responsible state that contributes to peace and prosperity in Northeast Asia and the world."

Hwang went on to highlight his determination to minimize the negative impact of internal and external risk factors such as isolationist tendencies abroad, and prioritize the task of stably managing state affairs.

Before the gathering, Hwang met one-on-one with outgoing U.S. Ambassador to Seoul Mark Lippert and shared his appreciation for Lippert's role in helping strengthen the South Korea-U.S. alliance. 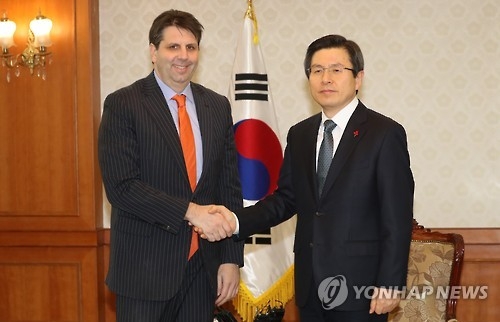 Lippert was quoted by Hwang's office as saying that he would continue to play a role in the development of the alliance after he leaves office on Jan. 20 in time for the swearing-in of the new Republican administration.