During a New Year's greeting with industry leaders, Hwang also stressed the need to brace for "revolutionary changes" in the wave of the so-called fourth industrial revolution.

The trend refers to industrial transformation driven by the convergence of emerging technologies such as artificial intelligence, the Internet of Things, biotechnology, 3D printing and nanotechnolgy.

"The government will focus all policy efforts on helping our broadcasting and communications industries find a new breakthrough in the midst of this rapidly changing (industrial) environment," Hwang said.

"Above all, in line with the convergence of broadcasting and communications, (the government) will actively overhaul related institutions and regulations to help create new services," he added.

The acting president, in addition, said that the government will make continued efforts to support the country's cultural content exports, and that it would seek to ensure broadcasters fulfill its responsibilities to enhance public interests.

Before the meeting, Hwang visited the Seoul headquarters of the state-run Korea Workers' Compensation and Welfare Service to discuss the issue of unpaid wages for workers.

Hwang pledged to strive harder to prevent the cases of overdue wages, saying the government will expand a program that offers part of unpaid wages in case employers are incapable of making due payments. 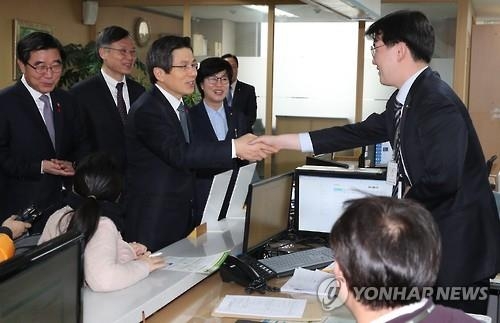