SEOUL, Jan. 18 (Yonhap) -- On a recent Tuesday night, 22-year-old college student Lee Tae-jun was surprised to see one of the last things he had expected while watching a prime time TV show featuring celebrities and hip-hop artists.

Rapper Cheetah and model Jang Sung-hwan together performed "Yellow Ocean," a tribute song they wrote for the deadly ferry sinking in 2014 that left more than 300 people, mostly high school students on a field trip, dead or missing.

Cameras showed the bereaved families wearing yellow jackets -- a color symbolic of the tragedy -- sobbing in the audience.

"I did not expect the entertainment show to bring out such a sensitive or somewhat political issue," Lee told Yonhap News Agency.

A number of pop singers, who often refrain from having political voices, have come to the fore, releasing songs directly slamming the government and those holding power for the latest influence-peddling scandal centered on President Park Geun-hye and her jailed friend Choi Soon-sil. The ferry Sewol disaster is one of the issues that surfaced again following the outbreak of the scandal, with people demanding Park expound upon her alleged seven-hour absence when the disaster took place.

Despite the presidential office Cheong Wa Dae's repeated denials, rumors have persisted that she had cosmetic surgery or other treatment during the critical time, while failing to carry out official duties.

"Many days have passed, but we still remember (the tragedy) as there is still a lot to be revealed with our candlelight," Cheetah and Jang sang, referring to candlelight vigils that have continued for the past 12 Saturdays against the scandal-hit president.

The clip of the two performing had recorded nearly 1 million views on the country's top portal site Naver as of Tuesday. 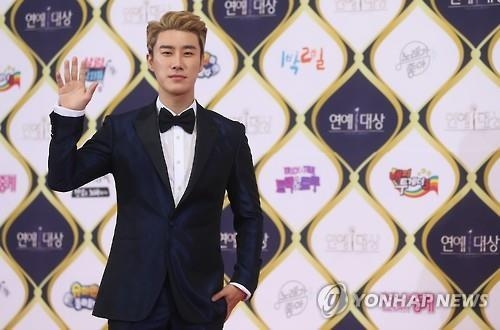 Rapper San E is one of the artists who first broke the silence with music.

His song "Bad Year" -- a homonym in Korean that also means "bitch" -- seems like any other ordinary love song that portrays a breakup following the girlfriend's cheating at first glance. But a closer look reveals that it plays on words here and there, reminding the listeners of figures at the center of the current political crisis, such as Park and her friend Choi.

The song topped major Korean music streaming charts, including Melon, Mnet and Genie, when it was first released in November.

Though the rapper and his agency Brand New Music have not admitted to making the song with an aim to diss the president, the chief of the agency Rhymer, a hip-hop artist himself, earlier said the song is "open to interpretation."

"There were artists who released songs criticizing the government on SoundCloud free of charge, but they were listened to by only a few fans," said Lee, the college student. "San E showed us that artists can release an official album while sophisticatedly touching upon the current political issues." SoundCloud is a music platform often used by underground and amateur artists to share their music online.

Singers DJ DOC, Verbal Jint, Lee Hyo-ri and Lee Seung-hwan are some other singers who released songs in line with the latest political crisis. 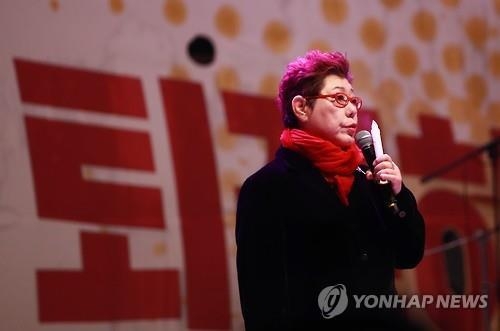 Experts say the trend of pop artists releasing songs critical of the government is a new phenomenon here.

"This is something totally new," professor Lee Taek-gwang at Kyung Hee University told Yonhap News Agency. "There used to be a distinction between pop music and protest music but now the demarcation is disappearing.

"Pop culture represents a society's most conservative aspect," Lee said. "The fact that pop singers are coming on the stage with these lyrics means that the criticism against the government is the mainstream voice at the moment."

President Park was voted to be impeached last month, and is currently awaiting the Constitutional Court's decision on whether to approve the parliament's decision or reinstate her.

A number of trials are under way, including two involving Choi, who is suspected of meddling in state affairs and amassing profits using her ties to the president.

Millions of South Koreans have taken to the streets for the last couple of months, demanding Park's prompt ouster. Some remain skeptical about the latest trend of pop singers releasing such songs, questioning their veracity.

"Where were they when the bereaved families of the ferry disaster needed public support the most?" 25-year-old graduate student Yoon He-su said. "It would have been much more meaningful if they released the songs earlier.

"It just seems very opportunistic to me," she said. "Artists who have kept voicing their stance about what they believe is right seem more genuine."

Critics say, after all, the pop artists create what the general public wants.

"Right now, this is the kind of music the public wants, and that is why the artists are making it," culture analyst Kim Sung-soo told Yonhap News Agency.

"We are living in a society where people's willingness to create their own culture is realized in the form of consumption," he said. "If the singers want to sell their music, they need to put the public's voice in it."

The question now is whether this phenomenon will remain a one-time trend that came with the current or be cemented in the country's pop industry.

"It is still very difficult for the artists to directly touch upon sensitive issues, such as labor matters," professor Lee said. "We need more time to see where this trend heads."