The K League Classic club said the 25-year-old attacker landed in South Korea on Tuesday and has joined their offseason training in Ulsan. Gangwon, however, didn't disclose the details of the contract with Diego, who scored two goals in eight matches for the Brazil U-20 side that won the South American Youth Championship in 2011, along with Neymar and Oscar.

Gangwon said Diego is an energetic player who runs all over the pitch and has good physique and flexibility. The 182-centimeter-tall man has been nicknamed "Drogbinha" for his resemblance to former Chelsea striker Didier Drogba.

Diego made his pro debut with Flamengo in 2010. He signed with Russian outfit Alania Vladikavkaz in 2012 and moved to the Portuguese club Vitoria FC two years later, playing with South Korean striker Suk Hyun-jun.

Diego returned to his home country in 2015 after signing with Bragantino, scoring six goals in 28 matches. He then played for the Saudi Arabian club Al-Qadisiyah and the Chinese side Shijiazhuang Ever Bright on loan.

Gangwon earned a promotion from the second-tier K League Challenge, and have been by far the busiest club this winter. Their notable signings include Lee Keun-ho, former Asian footballer of the year; Lee Bum-young, an Olympic bronze medal-winning goalkeeper; and Jung Jo-gook, the reigning scoring champion and MVP in the K League Classic. 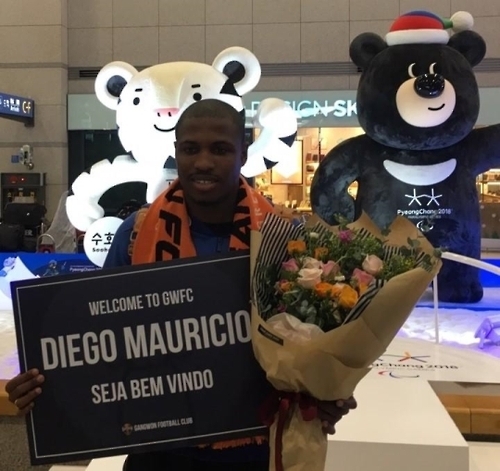