"Just as President Park Geun-hye's politics were based on her father's glory, Moon is also influenced by late President Roh Moo-hyun," Nam said during an interview with Yonhap News Agency. Nam said the father's legacy led to a lack of verification of Park's capabilities.

Park, currently impeached by the parliament on alleged corruption charges, is the daughter of Park Chung-hee, who was president for 18 years after seizing power in a military coup in 1961. Moon, who served as Roh's chief of staff, is also considered to have inherited his legacy. The late president committed suicide in 2009 amid a corruption investigation involving his family.

Nam said leaders whose strength is based on reputation alone are bound to run into trouble, citing the influence-peddling scandal surrounding Park and her confidante.

"The pro-Moon faction's hegemonic tendencies are what can be seen in the pro-Park group," Nam said. He defined hegemony as a dogmatic idea that seeks to monopolize power, while attacking anyone that raises questions. 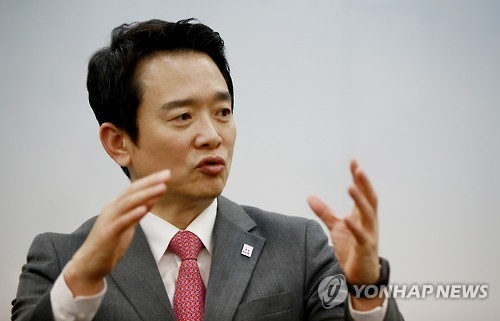 The governor also criticized Moon's pledge to reduce the mandatory military duty to one year. Nam has been claiming South Korea should shift to a volunteer military system from the current conscription, in line with the falling birthrate.

"(Moon's remark on reducing the period of service) is irresponsible and a politically impossible agenda," Nam said, adding such a move will pose threats to national security.

"Whether Ban joins the Bareun Party, or stays outside, he will have to compete with me," Nam said.

The governor added he had proposed to Rep. Yoo Seong-min, another contender from the party, to hold a debate session on political vision.

"We are a new party with 30 seats and an approval rating standing at 10 percent," Nam said, highlighting the importance of coming up with visions that can attract people's attention.

The Bareun Party, which will officially set sail this month, spun off from Saenuri in the wake of a factional feud with loyalists to Park. The party vowed to take a relatively progressive stance on economic issues, while maintaining a hawkish position on North Korea.