"The government will accelerate its drive to focus on job creation," Finance Minister Yoo Il-ho said in a minister-level meeting held in Seoul. "The public sector will hire 30,000 in the first half."

He said more than one-third of the planned budget for job creation will be used in the January-March period in a bid to deal with the issue from the beginning of the year.

The country's jobless rate reached a six-year high of 3.7 percent last year, with that for young people hitting an all-time high of 9.8 percent. The tightened job market is largely driven by a slump in the manufacturing sector which employed 4.48 million people last year, down 5,000 from a year earlier, marking the first negative growth since 2009.

The manufacturing business, the country's backbone industry, is closely linked with exports, which fell 5.9 percent throughout last year due to contracted global demand.

Earlier, the finance ministry announced its 2017 policy plan to strengthen fiscal intervention for the economy, which has been suffering from downside risks at home and abroad, including political turmoil sparked by the impeachment of President Park Geun-hye.

Under the economic policy road map, the South Korean government will use nearly 70 percent of the 400 trillion won (US$344.2 billion) budget earmarked for 2017 to prop up Asia's fourth-largest economy, which is forecast to have near zero growth in the fourth quarter of 2016. 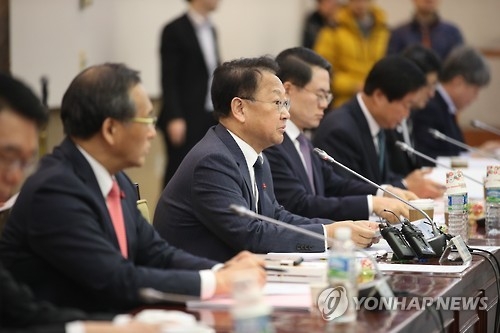