SEOUL, Jan. 18 (Yonhap) -- Egg prices that have been jumping for over a month from the avian influenza epidemic in the country are showing signs of calming down after imports started arriving, officials said Wednesday.

The price for a set of 30 eggs fell for the first time in 37 days Friday, and again Tuesday. Discount supermarket chains, including E-mart, Homeplus and Lotte Mart, have not raised their prices for days. The last price increase at E-mart was Jan. 6. At Homeplus, the last increase was on Jan. 7. Lotte last marked up the price on Dec. 28. It has since opted to sell eggs imported from the United States to substitute for the expensive eggs from local farms.

The government had rushed to stabilize the egg prices with the approaching Lunar New Year holiday next week when many of the prepared foods require eggs.

Lee Young-ho, who oversees livestock management at the Korea Agro-Fisheries & Food Trade Corp., credited the government's decision to import eggs as having had an effect.

"Some of the chicken farms had stocked up on the eggs, predicting a bigger price increase," he said. "But with the imports from the United States and signs that the price was stabilizing, they started to sell the eggs, resulting in price drops."

The government plans to bring in approximately 1,500 tons of eggs from the U.S. and Spain before the Lunar New Year holiday that begins on Jan. 27. 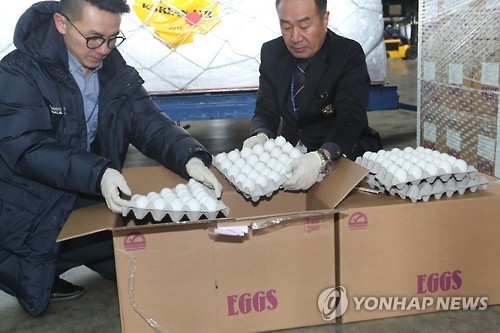