"It's the time when solidifying the stability of the financial market is more important than any other year," Yim Jong-yong, chairman of the Financial Services Commission (FSC), said at a government-civilian meeting on financial policy. It marked the first plenary session in 2017 of the Committee for South Korea's Financial Development, an advisory arm of the FSC.

Yim called for concerted effort to build a strong "breakwater" for the financial sector, saying uncertainties are expected to run high from U.S. rate hikes and other risk elements amid low growth in the global economy.

The panel approved the three-point core strategy of the FSC for the year to cope thoroughly with risks, expand financial support for low- and middle-income people and help revitalize the economy. 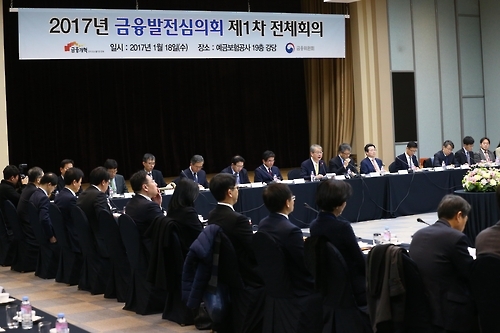 Yim added that the authorities will continue a drive to reform the nation's financial industry in a "standing reform posture."

The FSC is seeking to revise legislation on Internet-only banks and the governance change of the Korea Exchange, South Korea's sole stock market operator.

"Circumstances surrounding our financial industry both externally and internally are unlikely to be favorable," he said. "It's important to closely monitor financial market conditions and map out response measures in a pre-emptive way."