After a nearly four-hour review at the Seoul Central District Court, Lee, vice chairman of Samsung Electronics Co., was taken to a detention center in Uiwang, south of the capital city, where he will wait for the court's decision. The result is likely to come out near or after midnight.

On Monday, an independent counsel looking into the scandal centered on the president sought the warrant to arrest Lee on charges of bribery, embezzlement and perjury.

Lee is accused of giving or promising some 43 billion won (US$36.3 million) worth of bribes to Park's jailed friend Choi Soon-sil in return for the state-run pension fund's backing of a merger of two Samsung affiliates.

Prosecutors said that kickbacks given to Choi were tantamount to bribes to Park.

The merger was seen as critical for the group's management succession to Lee, the only son of ailing Samsung Electronics Chairman Lee Kun-hee,

"We have fully explained (our stance) to the court," Lee's attorney Song Woo-chul told reporters after the court review was completed. "We are sure that the court will make a wise decision."

Lee Kyu-chul, the probe team's spokesman, also said they expect a wise decision from the court, adding their investigation into other conglomerates will continue as planned, regardless of the court's decision on the warrant request.

The key issue debated in court was whether Samsung gave the money for any kind of reciprocal favors, according to Song and Lee, the spokesman.

On his way to and from the court, the Samsung heir declined to answer any questions raised by reporters.

The probe team's decision to seek a warrant came a few days after Lee was grilled by investigators for about 22 hours from Thursday to early Friday.

If arrested, Lee will be the first senior executive arrested over the latest scandal. It will also mark the first time that the head of the country's largest business group has been put behind bars.

The investigation team said they will carry out their investigation into three other senior Samsung executives, including Vice Chairman Choi Gee-sung, without detention. 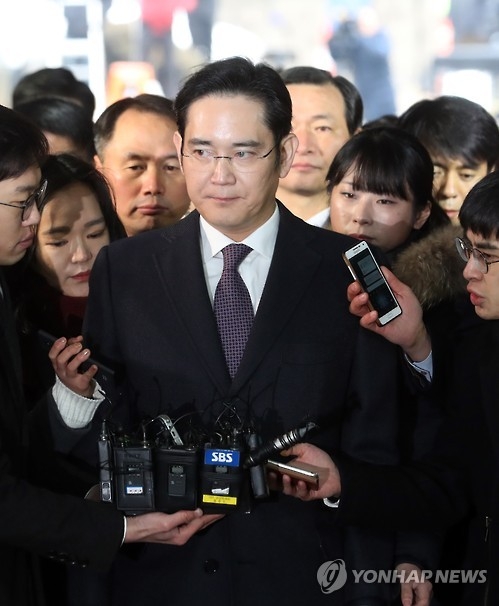