SEOUL, Jan. 18 (Yonhap) -- Labor Minister Lee Ki-kweon urged big businesses on Wednesday to employ more youth in the first half of the year as the sluggish economy is expected to further worsen youth unemployment.

Lee made the call during a meeting with leaders of the country's top 30 conglomerates after the jobless rate for youth climbed to a record 9.8 percent last year.

"In order to ease conditions in the youth job market, which is expected to become severe in the first quarter, and reduce gaps in the labor market, we need the top 30 conglomerates to play a leading role," he said at the meeting in central Seoul.

Lee pledged the government's best efforts to increase the number of jobs and resolve income gaps between regular and irregular workers.

"We fear that the job market will worsen further," he said, citing various risks, including a slowdown in domestic consumption and uncertainties at home and abroad. "The parents' generation, labor and management, the government and political circles must all do our best for our young people who are earnestly wishing for a job."

The minister called on the conglomerates to swiftly draw up expansionary hiring plans for the first half. He also urged them to push for reforms in salary systems, greater skill-based use of labor, a balance of work and family life, and job security for irregular workers. 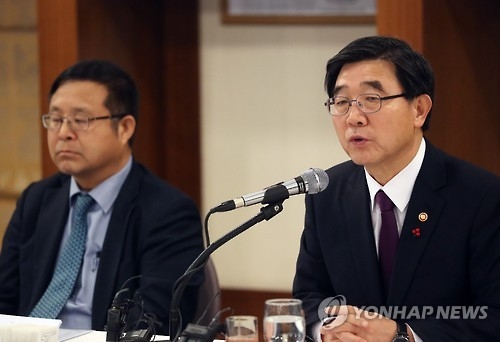