The aide called the reports groundless and warned that Ban would consider taking legal action against them.

"We will seek all legal measures, both civil and criminal, against false reports," the aide said, declining to be named.

The reports, initially published by Inner City Press, an online media outlet, have said that Ban's brother Ki-ho had been involved in a mining business in Myanmar through his firm KD Power Co. after having toured the resource-rich country with a U.N. delegation.

The reports sparked speculation that Ban's brother might have acted as if he were a U.N. official in Myanmar exploiting the world body's influence for his business.

Ban's aide also refuted an opposition lawmaker's claim that his brother's company was expelled from the U.N. Global Compact after engaging in mining activities that ran counter to the initiative's environmental principle. The initiative is a corporate sustainability movement that underscores universal principles on human rights, labor, environment and anti-corruption.

Ban's aide said that his brother has no relations to any illegitimate mining business.

Allegations involving Ban's relatives emerged amid his aggressive efforts to build grassroots support ahead of a presidential election this year.

Though Ban has yet to officially declare his bid for the country's top elected office, he has repeatedly signaled his strong presidential ambitions, vowing to work for a change in politics -- in an apparent swipe at establishment politicians. 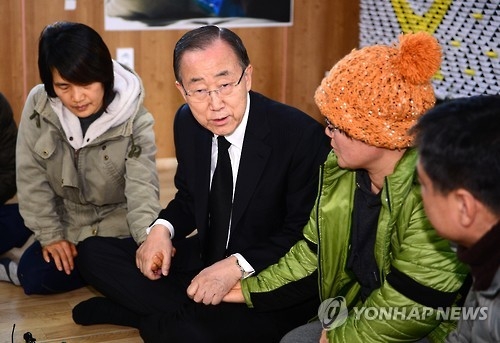