SEOUL, Jan. 18 (Yonhap) -- A former president of a local university was questioned by investigators Wednesday over allegations the school gave undue favors to the daughter of President Park Geun-hye's close friend, who is at the center of an influence-peddling scandal rocking the country.

Choi Kyung-hee, who led Ewha Womans University in Seoul from 2014 to 2016, appeared before the office of the special prosecutor to undergo questioning as a suspect.

Choi is accused of giving unlawful favors to Choi Soon-sil's daughter Chung Yoo-ra in terms of admission and academic affairs, though she has flatly denied the allegations.

Three professors at the university have been formally arrested for their involvement in the suspected irregularities.

Chung, a former member of the national equestrian team, has been held at a detention center in Denmark since her arrest earlier this month. 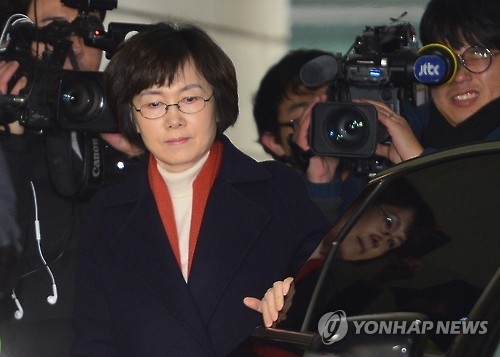