The Hydrogen Council was launched in Davos, Switzerland, on Tuesday on the sidelines of the annual meeting of the World Economic Forum in the ski resort town, with 12 other leading automakers and energy firms participating.

"We are determined to develop and provide platforms to realize a hydrogen society while trying to seek cooperation from companies in other fields as automakers alone are not enough for the commercialization of fuel cell vehicles," Yang Woong-cheol, vice chairman of Hyundai Motor, said in a keynote speech. "We are about to commercialize fuel cell cars two decades after we began developing them as the next generation power train in the early 1990s."

Yang introduced the efforts by the South Korean government to promote the hydrogen vehicles in cooperation with Hyundai and other South Korean firms.

South Korea aims to produce 630,000 fuel cell cars annually, about one-tenth of the total annual production, and build 520 hydrogen fuel stations across the country by 2030, according to Yang.

Hyundai will roll out a new fuel cell SUV model in time for the opening of the Winter Olympics in PyeongChang, Gangwon Province, in February 2018, he said.

Hyundai Motor's Tucson SUV was the first mass-produced fuel cell car in the world in 2013.

High prices of the eco-friendly car and a lack of fuel stations have served as stumbling blocks in South Korea, with only 78 fuel cell cars having been sold to the local governments and public firms.

The South Korean government announced plans late last year to export 14,000 fuel cell cars and set up 100 hydrogen fuel stations by 2020 to promote the fuel cell cars, which use a fuel cell and a battery to power an electric motor instead of an engine.

Because its fuel cell requires oxygen, the car purifies air for oxygen and thus gathers fine dust in the process. 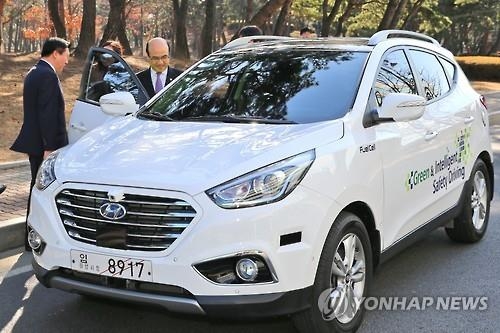