The government also decided to establish a system that would enable state anti-terrorism institutions to quickly share related information and disseminate it to citizens in emergencies, the officials said.

These plans were endorsed at a session of the national counterterrorism panel, presided over by Acting President and Prime Minister Hwang Kyo-ahn.

"Terrorist organizations could plot to carry out acts of terrorism regardless of the time and place even at this moment, and our citizens can also suffer damages at any time, like North Korea's rear-area operations given that North Korea has repeatedly threatened provocations," Hwang said during the session. 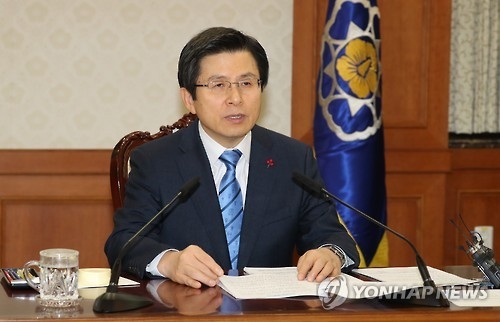 "With terrorist threats becoming increasingly tangible, the government must make its best efforts to ensure the citizen's safety through pre-emptively preventing terrorist attacks and putting in place a thorough terror response system," he added.

Also included in the anti-terrorism measures is the operation of a national anti-terror inspection team consisting of experts in firearms, explosives, and chemical, biological and radioactive materials. The team aims to detect and address the country's vulnerabilities to potential attacks.

The government also decided to enhance anti-terrorism operatives' expertise through regular training based on various scenarios and to push for the creation of an additional police commando unit to support counterterror activities in areas north of Seoul.

To enhance security for the 2017 FIFA U-20 World Cup and 2018 PyeongChang Winter Olympics, both in South Korea, Seoul plans to form the counterterrorism and safety headquarters involving police, fire services and the military. The government also plans to craft security plans for the two events and carry out security drills.

The U-20 World Cup will take place from May 20 to June 11 in six cities -- Cheonan, Daejeon, Incheon, Jeju, Jeonju and Suwon. The PyeongChang Olympics is set to be held in the alpine town of PyeongChang and its two adjacent cities in Gangwon Province from Feb. 9-25, 2018.