SEOUL, Jan. 18 (Yonhap) -- A close aide to President Park Geun-hye admitted Wednesday that he leaked classified information to a woman at the center of a South Korean presidential scandal, but claimed he only intended to help the president.

Jeong Ho-seong, a former presidential secretary, made the argument at the Seoul Central District Court where he stands trial on charges of divulging confidential information to Choi Soon-sil, Park's close friend and confidante.

"I generally acknowledge the charge against me and my statements made to the prosecution," he said. "But I was simply trying to assist the president." 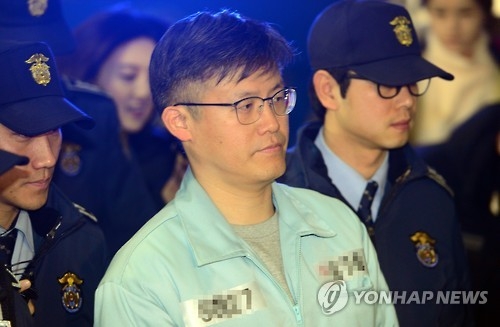 The scandal that led to the president's impeachment centers on allegations that Choi colluded with Park to extort money from conglomerates and control state affairs behind the scenes.

Jeong is accused of working with Park to e-mail or deliver 47 documents classified as official secrets to the woman who never held a post in government. Choi also received drafts of some speeches that were to be delivered by Park and made corrections to them. The former aide has said he provided the documents so as to get broader feedback.

"It's true that the president told me to listen to Choi's opinions and incorporate them when necessary," Jeong said. "But she did not specifically order me to send this or that document."

Defending Park, he added that the president was trying to go the extra mile to skillfully run state affairs.

"I, too, was doing my best to assist the president even in the smallest way," Jeong said. "It breaks my heart to hear that I colluded with her."

Jeong is a member of the so-called "doorknob trio" who are believed to have had the most intimate access to the president.