SEOUL, Jan. 18 (Yonhap) -- South Korea's ruling Saenuri Party on Wednesday summoned key loyalists to President Park Geun-hye, amid its interim head's vow to purge them to regain the public's support after her impeachment.

The party's ethics committee summoned Rep. Suh Chung-won, Rep. Choi kyoung-hwan and Rep. Yoon Sang-hyun to defend themselves, adding it will make a decision on their punishment Friday.

The committee is widely expected to suspend their party membership for three years, rather than seeking their ouster that calls for two-thirds of approval from its lawmakers.

In Myung-jin, the interim head, has been seeking to remove key loyalists as a step to normalize the Saenuri Party that has been dealt a heavy blow by Park's impeachment in December.

Saenuri also decided to suspend the membership of Rep. Kim Hyun-ah, a lawmaker elected as a proportional representative, for three years as she decided to join the splinter Bareun Party.

If Kim wants to maintain her lawmaker status, Saenuri must choose to oust her from the party. If Kim voluntarily departs Saenuri, she would lose her seat. Her status is currently that of a lawmaker despite her membership being temporarily suspended.

The Bareun Party, which will officially set sail later this month, is made up of 30 lawmakers who bolted from Saenuri after they clashed with Park loyalists. 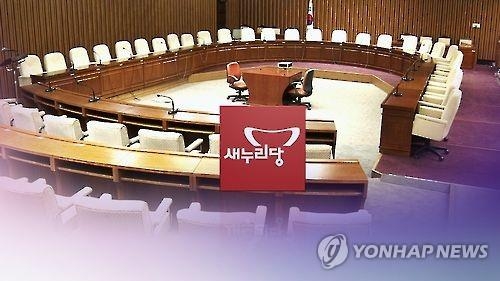