"The government will first create more jobs in the public sector," Moon said, claiming the area currently takes up 7.6 percent of local jobs, hovering below the average of 21.3 percent tallied for members of the Organization for Economic Cooperation and Development (OECD).

Moon said he will increase the number of fire fighters, police, teachers, social-welfare employees and noncommissioned officers in the military.

"We are short 17,000 firefighters," Moon said, adding he will abolish the conscripted police force program and instead hire more regular officers.

"The labor law limits working hours to 52 hours a week, including extended hours, but the administrations of Lee Myung-bak and Park Geun-hye have made people work up to 68 hours a week by twisting the rule to exclude Saturdays and Sundays in the ceiling," Moon said. "Through reducing working hours, I will create 500,000 more jobs."

The potential candidate said he will also have workers use all of their vacation time, which will result in the creation of 300,000 more jobs.

Moon then pledged to allow parents to work from 10:00 a.m. to 4:00 p.m. before their children enter elementary school without a reduction in their paychecks. 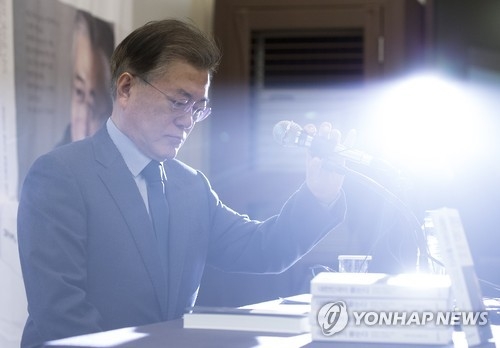