SEOUL, Jan. 18 (Yonhap) -- North Korea on Wednesday defended its move to test-fire an intercontinental ballistic missile (ICBM) as an act of self-defense against the United States, warning that no one can take issue with Pyongyang's plan.

North Korea's move to launch the missile would contribute to bringing peace and stability to Northeast Asia and the world, the country's main newspaper Rodong Sinmun said.

"As our country possesses hydrogen bombs as well as miniaturized and diversified nuclear weapons, test-firing an ICBM will have significant meaning for us," the daily claimed.

Pyongyang has repeatedly threatened to fire off an ICBM since its leader Kim Jong-un said in his New Year message that the country has entered the final stage of launch preparations.

North Korea's foreign ministry also said that the country can test a missile at any place and time if its leadership gives the order.

The North is seeking to develop an ICBM which can fly as far as the U.S. mainland, claiming that its development of nuclear weapons is a deterrent against what it called Washington's hostile policy toward Pyongyang. 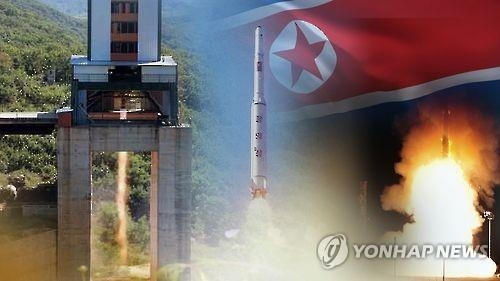 North Korea has for some time argued that it can produce miniaturized nuclear weapons, but many military experts have said the repressive regime is still a few years away from mastering such technology.

The North's repeated threat is seen as aiming to press Washington to change its stance toward Pyongyang as U.S. President-elect Donald Trump takes office on Friday.

Experts said that the North is highly likely to carry out military provocations at some point in March to protest an upcoming military exercise between South Korea and the U.S.

"We see a high possibility of a North Korean provocation around the time of the joint military drill," said a government official.

Yang Moo-jin, a professor at the University of North Korean Studies, said that the North's possible missile launch may be timed with the end of the Seoul-Washington military exercise around April.

"I expect that the North would make provocative acts around April 20 as it will celebrate the 85th anniversary of the creation of the Korean People's Army which falls on April 25," he said.

N.K. repeats threat to launch ICBM as Trump is set to take office this week

N.K. repeats threat to launch ICBM as Trump is set to take office this week