SEOUL, Jan. 18 (Yonhap) -- South Korean athletes began training programs for this year on Wednesday as they gear up for the Winter Olympics and the Asian Games in 2018.

More than 270 athletes and coaches from eight sports vowed to give their best efforts at a training kick-off ceremony held at the Taeneung National Training Center in Seoul. Fencer Park Sang-young, the reigning Olympic champion in men's epee, and judoka Jeong Bo-kyeong, who won the silver medal in the women's 48kg division at the Rio de Janeiro Summer Games, were the athlete representatives that delivered the oath.

"In February 2018, the country hosts the Winter Olympics for the first time, and in August 2018, we will have to compete at the Asian Games in Jakarta," said Lee Kee-heung, head of the Korea Sport & Olympic Committee (KSOC). "Our performance will depend on how much we prepare and work in this year. I hope athletes don't lose their drive and focus on their training."

Lee said the nation's Olympic body will give its full support to help athletes train in a good environment.

"The KSOC is ready to support your training," he said. "Let's raise the country's value in sports and give hope and joy to people again." 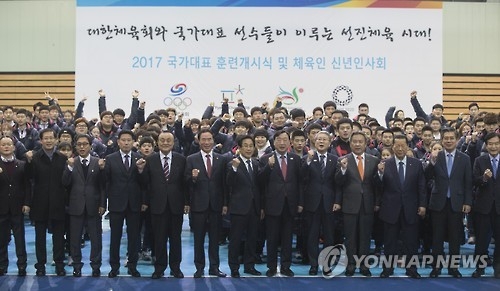