Park defeated Geza Imre of Hungary 15-14 in the thrilling final to win an unexpected gold medal in men's individual epee at the 2016 Rio de Janeiro Olympics. Down 14-10 with less than three minutes remaining, he reeled off five unanswered points to complete the unlikely comeback and shoot to stardom.

The 21-year-old said he wants to put aside the glorious moment at the Olympics and start fresh in 2017.

"For this year, I will forget what I did at the Olympics and will only focus on winning the World Championships in July," he said after a training kick-off ceremony held at the Taeneung National Training Center in Seoul.

Park previously collected a team silver at the 2014 World Championships.

"I won't think too much about my results, but of course, I'll be aiming for a gold medal at the World Championships," he said.

Park said he will focus on strengthening his mentality rather than improving his techniques this year. The fencer said he feels the pressure of defending his top dog status. Park said he has been seeing a therapist to fix the problem.

"I know I'm feeling some anxiety because I push myself to perform better," he said. "But because of this, I have a hard time concentrating on my work."

As the defending Olympic champion, Park said he will be the most targeted fencer by others, but doesn't really care about it.

"I noticed that if you change your routine or existing skills just because you are analyzed by others, it doesn't really help," he said. "I'm not going to change the big picture."

After the Olympics, Park has appeared in advertisements and even published a book. Although he has been busy away from the piste, the fencer said he was only happy to promote fencing to South Koreans.

Park was the athlete representative along with judoka Jeong Bo-kyeong that delivered the oath at the training kickoff ceremony. He said he wants to do it again.

"It was a big honor for me to represent the national team athletes," he said. "I want to collect good results, and hope to deliver the athlete oath again." 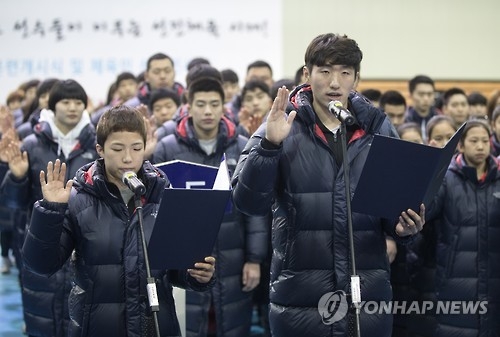