During his visit to the state-funded Electronics and Telecommunications Research Institute in Daejeon, 164 kilometers south of Seoul, Hwang also stressed the need to increase technological assistance to small- and medium-sized enterprises (SMEs).

His remarks came amid the government's stepped-up push to sharpen the country's technological edge to stay ahead in an increasingly fierce global industrial competition.

"(The government) will spare no efforts to support the development of core technologies in the sectors related to nurturing new growth engines -- such as artificial intelligence, smart cars and the Internet of Things," he said during his meeting with researchers at the institute.

"I also call on (state-funded research institutes) to play an active role to provide technology support to SMEs and promoting startups," he added.

Before his visit to the institute, the acting president had a luncheon meeting with the chiefs of 25 state-funded think tanks.

At the meeting, he stressed the need to bolster the morale of researchers through measures such as tax exemptions on technology license fees, and give more autonomy in the execution of budget for research institutes.

He also voiced hopes for creating new growth engines through the convergence of various sectors such as culture, arts and agriculture. 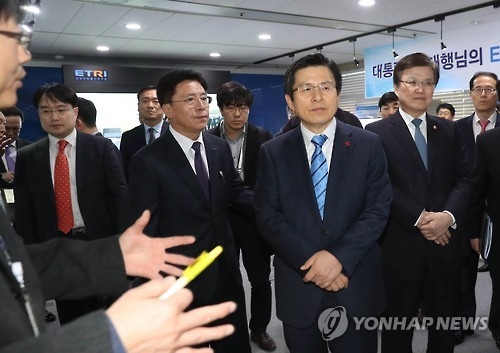