The event on Tuesday featured the premier stage for the EP's leading single "Hobgoblin," as well as a Q&A session where the members received and answered various questions by reporters.

The six-track album, released on the same day as the showcase, marks the transition from the usual cute and lovely concept of the group to a new tough, strong image.

The EDM trap lead song, partially lyricized by pop diva Hyuna who is also under the girl group's agency Cube Entertainment, narrates the voice of a female goblin that passionately seduces her lover.

CLC, composed of members --Seunghee, Yujin, Seungyeon, Sorn, Yeeun, Elkie and Eunbin-- made their debut in 2015 with its first album "First Love." 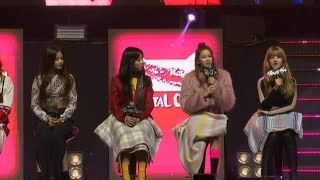