SEOUL, Jan. 18 (Yonhap) -- Foreign Minister Yun Byung-se held a meeting with U.S. Ambassador to South Korea Mark Lippert on Wednesday ahead of the envoy's departure scheduled for later in the week.

With the start of the Trump administration in Washington on Friday, the envoy appointed by President Barack Obama is slated to return home.

"From my standpoint, you left an indelible mark in the history of the U.S.-Korea alliance," Yun told Lippert at the opening of the meeting.

"Our alliance relationship is the best it has ever been and you are the best ever American ambassador I have ever seen," Seoul's top diplomat told the ambassador.

The two officials also discussed an array of bilateral issues ranging from North Korean security threats to broader global matters, with Yun hosting a farewell dinner for Lippert, according to the foreign ministry. 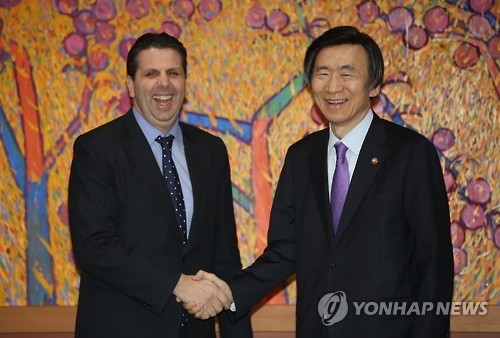