Minister Cho Yoon-sun and former presidential chief of staff Kim Ki-choon are being charged for abusing their authority, said the probe team looking into an influence-peddling scandal that led to the president's impeachment last month.

Cho served as the senior presidential secretary for political affairs from 2014 to 2015 and became the culture minister last year. Kim was the presidential chief of staff from 2013 to 2015.

The latest decision to seek the arrest of Cho and Kim came shortly after the investigation team questioned them for 21 hours and 15 hours, respectively, from Tuesday to early Wednesday.

The investigators suspect that the two were the masterminds behind the alleged creation and management of the blacklist intended to block artists critical of the government from receiving state support.

The investigation team's spokesman Lee Kyu-chul said last week "the creation and execution of the blacklist severely infringe upon the people's freedom of thought and expression."

Both Choi and Kim have been flatly denying the allegations raised against them.

The Seoul Central District Court will hold a hearing on Friday to review the legality of detaining the two suspects.

Lee earlier said they are investigating whether President Park was involved in the creation of the list.

The investigation team has been accelerating its probe, questioning and summoning a number of figures implicated in the scandal that broke out in late October. 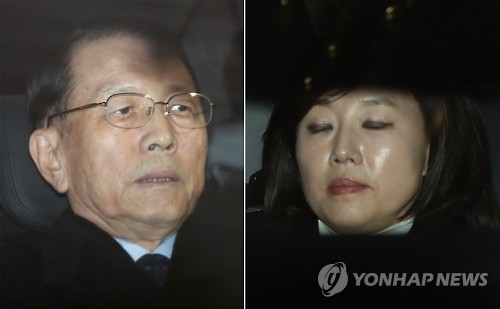