TAEBAEK, South Korea, Jan. 19 (Yonhap) -- For some, the annual snow festival in Taebaek, a tucked-away, mountainous city in Gangwon Province, feels like icing on the cake. Others, on the other hand, might not think it is even necessary in the first place.

Every winter, tens of thousands of travelers take a trip to this land of snow -- with or without the festival. People risk a frosty climb up the surrounding peaks and admire nature's magic that transforms bare trees and leafless branches into a snow-laden spectacle.

Taebaek, meaning big and bright, is located about 270 kilometers east of Seoul and sits at an average altitude of 800 meters. 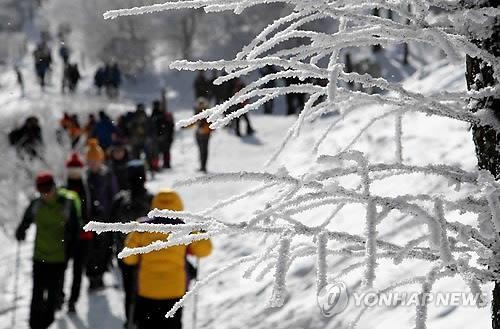 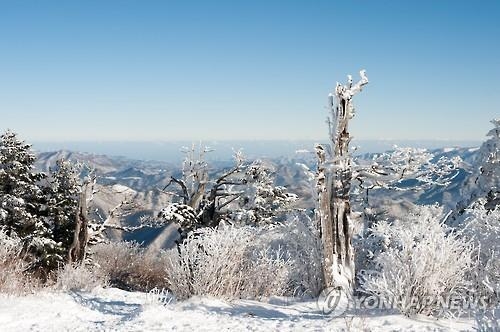 Earlier this week, visitors, in thick winter jackets and some in full hiking gear, were busy taking pictures in front of dozens of giant snow sculptures in various shapes, such as a traditional Korean house, cartoon characters and a mermaid.

Young children, obviously the most entertained group among them all, were absorbed in sledding down the slopes, as their parents struggled, with frozen fingers, to capture the moment on their smartphones. Traditional art and singing performances filled the crisp air of the otherwise quiet valley that echoed back the sounds. 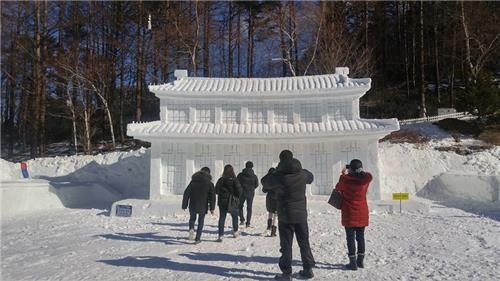 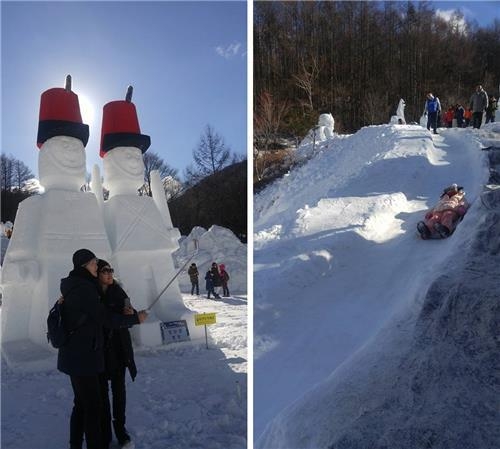 "I had a vague image of Taebaek being empty and barren, not to mention being so freezing cold," Park Young-eun told Yonhap News Agency on Monday afternoon. Coming from Changwon, South Gyeongsang Province, 400 kilometers southeast of Seoul, she organized a family trip with her two sisters and parents.

"We've had so much fun here, enjoying the beautiful scenery, fun events and great snow sculptures. Among other things, we love the organizers of the festival here being so kind to visitors," she said.

Her younger sister, Ju-hyung, said it would be nicer if the organizers turned down the music blaring from the main outdoor stage. A singer was performing there in front of a handful of people who braved the elements to listen to it.

"I wish singing wasn't allowed at a festival like this. It drowns out the birds' chirping. I came here to feel and hear the nature," she complained. Her mother, Hwang Soon-hye, who was dancing to the tune, stopped her moves and immediately countered back: "Don't be silly! I am enjoying the music." 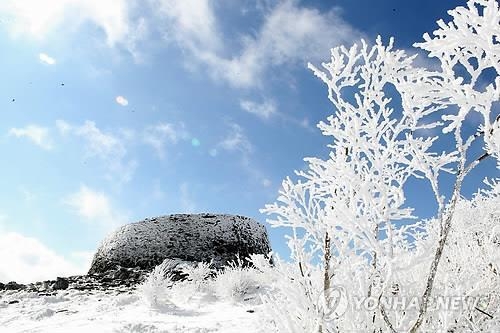 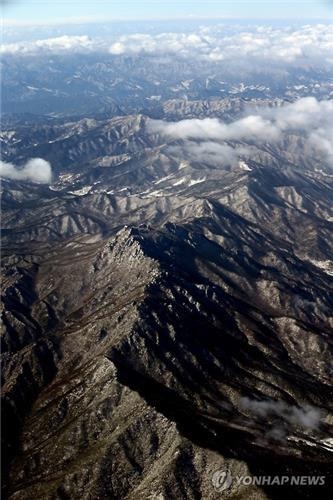 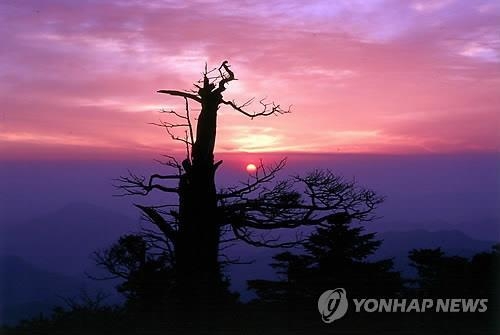 Nestled in the deep valley of Mount Taebaek, the city used to be a harsh place to live.

The brutally cold winter lasts until cherry blossoms give way to green sprouts in other parts of the country. The sterile soil doesn't produce rice, the Korean culinary staple. Locals grow other grains, corns, beans and potatoes -- substitutes for rice -- in dry paddies.

Aside from the lack of food and hostile weather, the city used to be a mecca of the mining industry from the '60s to the early '80s. During the prosperous industrial boom, the city's population peaked at more than 130,000. Now it has dwindled to around 50,000.

In 1995, the city launched the annual snow festival, which is in its 24th run this year, as it struggled to turn around the slow local economy, dragged down by declining coal consumption nationwide, and make the best of the city's clean nature and its main gift: heavy snow.

For around 10 days in January, the main festival zone is set up at the foot of Taebaeksan National Park. 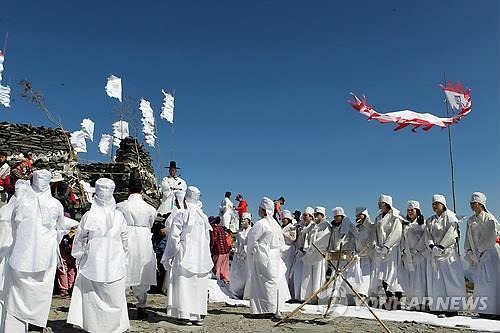 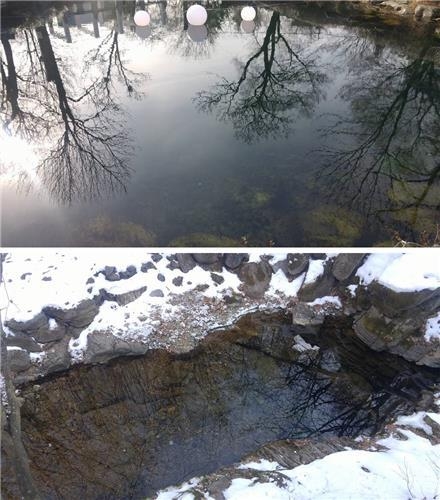 Taebaek has other distinctive geological features worth checking out: Hwangji Pond and Geomryongso that are believed to be the source of the Nakdong River and the Han River, respectively. The rivers are the two most important sources of water of the country.

"In a recent severe drought, the city government used the water from the pond. It was enough for 50,000 people for 2 1/2 months," said Yi Hea-ryan, a school teacher who volunteers at the pond as the city's tourism and culture guide. She said up to 5,000 tons of water daily flow from the pond, where Nakdong River, the longest river in the country at 510 kilometers, is said to have started.

A 1.4-kilometer leisurely walk along one of the Mount Taebaek trails leads to Geomryongso. The spring seems too small to possibly be the source of the Han River. Surprisingly, water keeps flowing from it, while other streams are all frozen. 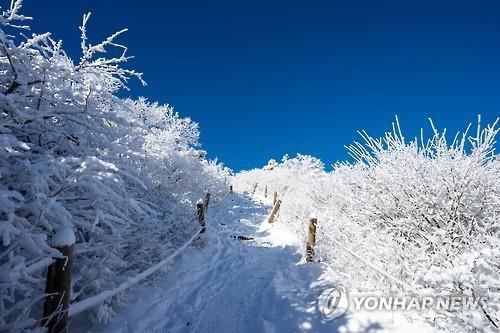 Climbing the mountain will become more interesting when visitors learn the symbolic meaning of the peninsula-long Mount Taebaek Ridge along the east coast. The mountain, and the ridge by extension, are often associated with strong, invincible spirits of the Korean people in literature and social contexts.

Mythologically, the mountain is widely revered as it is believed to be the home of the country's founding father Dangun. On the country's National Foundation Day of Oct. 3, a shamanic memorial service takes place at the religious altar located at the top of the mountain, 1,566 meters above sea level, for the country's well-being and prosperity.

"The only one big-scale resort here is famous for not having an air conditioner. Everyone will know why after a night's sleep," she said. "You can still enjoy snow and spring flowers here when they are all gone in other parts of the country."

Back at the festival site, another group of travelers were cautiously crossing the icy arch bridge to the Dangun Shrine, located not very far from the festival's main stage.

Seo Mi-sook, who was on the tour, said she didn't feel the festival was worth a long-distance trip from the southeastern port city of Busan.

"We took a 6:10 a.m. train this morning and had to transfer to a bus. It took us more than four hours," she said. "To be honest with you, I am a bit disappointed that there isn't much snow here. I expected to explore the area in knee-deep snow!"

For nature lovers and adventurers like Seo, the festival might be no more than an additional feast for the eyes. Enjoying the pure nature itself -- a snow-covered landscape, clean air and crystal-clear streams -- is more than enough to make the trip. 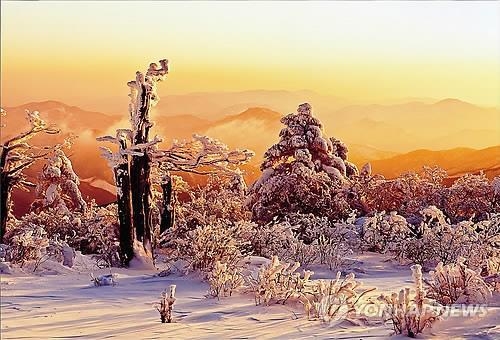