WASHINGTON, Jan. 18 (Yonhap) -- U.S. National Security Advisor Susan Rice said that a nuclear North Korea is one of the issues that worries her most as she prepares to leave office.

"This has been an evolving problem. We had ... North Korea with nuclear weapons some years ago, and that problem persists, and it is not getting better. So we want to be clear about that. When you ask me what worries me, that was one of the things that I pointed to," she said in an interview with PBS.

She picked "North Korea continuing to advance and perfect its nuclear missile program" as one of the biggest concerns, along with terrorism, Russia, and an unforseen conflict between India and Pakistan, as well as a pandemic flu.

Rice stressed the importance of having a good relationship with China.

"In fact, China, for better or worse, is an indispensable player when it comes to North Korea," she said. "Our global economy is such that the U.S. and China's economies are intimately linked. They hold a high proportion of our debt. There're just many ways in which we can't afford to play fast and loose with what is the most consequential bilateral relationship on the planet."

U.S. relations with China are expected to suffer under the incoming U.S. administration of Donald Trump as the businessman-turned-president is highly critical of Beijing for its unfair trade and currency practices and failure to exercise enough pressure on the North.

Trump has even raised questions why the U.S. should stick to the "one-China" policy of diplomatically recognizing only Beijing, not Taiwan, and spoke by phone with Taiwanese President Tsai Ing-wen for the first time in decades as U.S. president or president-elect in a breach of the decades-long diplomatic tradition. 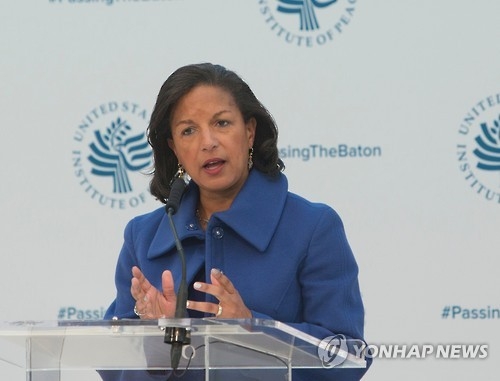