(ATTN: UPDATES with more quotes on importance of Chinese enforcement of sanctions)
By Chang Jae-soon

WASHINGTON, Jan. 18 (Yonhap) -- The nominee to become new U.S. ambassador to the United Nations said Wednesday the U.S. "can't let up on North Korea" forging ahead with its nuclear program, as she vowed to increase pressure on Pyongyang in close cooperation with China.

"North Korea is definitely one to watch. I think we're going to have to work closely with China to show the threat of what's happening. We can't let up on North Korea. What we are seeing right now is production of nuclear weapons," U.N. ambassador nominee Nikki Haley said during her confirmation hearing.

She said enforcement is key to sanctions, and "clearly there is more to do" with regard to the North.

When it comes to sanctions on the North, Chinese enforcement can "make magic," she said.

"I think, for us to do sanctions against ... North Korea, that's all well and good. If I can get China to help and really strengthen those sanctions, then we make magic," she said. 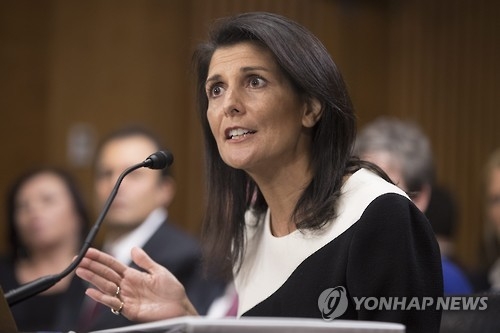 Haley repeatedly stressed the importance of working with China in order to deal with the North, and said she will try to convince Beijing that it is in China's own national interests to work with Washington to curb the North.

"We need China's help when it comes to North Korea," she said. "You see China right now pulling away from North Korea a bit because they see the missiles that are being built. They know what's happening. And we just have to encourage them that this is not good for China. And then when you do that, that's when you can start seeing more pressure being put on North Korea."

She also said China is now "nervous" and has already started to pull back economically from the North.

"China has the greatest threat to North Korea and they know that. And so what we have to do is let China know this affects China, this affects their region of the world, this affects us, not talk about it from our results and what it will do to the United States. Talk about it in terms of China."

Haley also said the U.S. needs "as many allies and alliances as we can possibly get."

"At this point, it isn't a numbers game. It is about addition because if we go and do sanctions, sanctions just by the U.S. doesn't work. Sanctions when we combine and work with alliances, that makes progress," she said.

"And so, so much of what I look forward to doing is not just expressing the ideals of the United States, and where we stand and agreements and disagreements that we have, it's also building coalitions so that we look so strong everyone wants to be our ally," she said.

Haley, the first female governor in South Carolina, first elected in 2011 and re-elected in 2014, was one of Trump's detractors. During the Republican primary, she endorsed Marco Rubio (R-FL) for presidential candidate. After Rubio pulled out of the race, she then endorsed Ted Cruz (R-TX).

Her nomination raised questions about whether the politician with little foreign policy experience would be able to tackle global challenges, such as Syria and North Korea, as head of the U.S. mission to the world body full of seasoned diplomats and skilled negotiators.

In particular, the job is significant in dealing with North Korea as the U.N. Security Council is responsible for imposing sanctions on the provocative nation bent on developing a nuclear-armed intercontinental ballistic missile capable of striking the U.S.