The North's leader toured a company under the Korean People's Army (KPA)'s Unit 233, stressing the need to boost its combat preparations, the Korean Central News Agency (KCNA) said without revealing the date of his inspection. 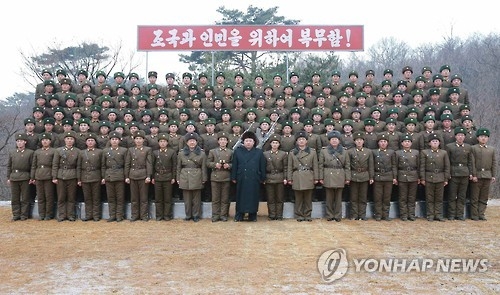 Seoul's unification ministry said that Pyongyang is seen as preparing for some sort of provocative action, warranting close watch.

"We are closely monitoring the situation as the North said it is ready to launch an ICBM if the leadership gives an order," a ministry official said.

The latest on-site tour to a military unit came after the North's leader visited several factories in an apparent bid to show the image of Kim caring for ordinary North Koreans.

The KCNA reported that Kim looked around barracks, including sleeping quarters and an education center, accompanied by Hwang Pyong-so, director of the KPA's general political bureau, and Ri Yong-gil, a vice chief of the KPA general staff.

The Seoul official said that Kim's checking of the unit's infrastructure facilities appears to be aimed at cheering up soldiers by showing "the military version" of his policy of caring for the people.