SEOUL, Jan. 19 (Yonhap) -- Sales at major department stores have been stagnant for the past five years and lack promising elements for a pickup, retail industry data indicated Thursday, leading some analysts to draw comparisons with Japan where the slump continued for 16 years.

Lotte is expecting an approximate 2 percent sales increase from the previous year for 2016 after its poor performance in December is likely to drag down the annual figure. The department store had flourished in 2010 and 2011 when its sales growth reached over 9 percent. The slump began in 2012, when the growth fell to 2.1 percent and hasn't yet recovered.

Hyundai Department Store projected a similar 2 percent range increase in sales. The estimate is somewhat better than the 0.5 percent of 2015, but officials said the increase is not that meaningful.

"Even if the sales did grow the projected rate, they can hardly be interpreted as significant improvement because the performances in 2014 and 2015 were very dismal," an official said.

Growth numbers for Shinsegae are harder to analyze, industry officials said. Its sales from January to November were up 6 percent from the previous year, but much of the gain could be due to a one-off factor from a Seoul branch reopening in the posh part of the capital in August, with 50 percent more floor space and a renovated interior.

Shinsegae's sales growth hit as high as 12.5 percent in 2011 but nosedived to 2 percent in 2013. In 2015, the growth rate was stunted at zero percent, which would be minus growth given the inflation rate. 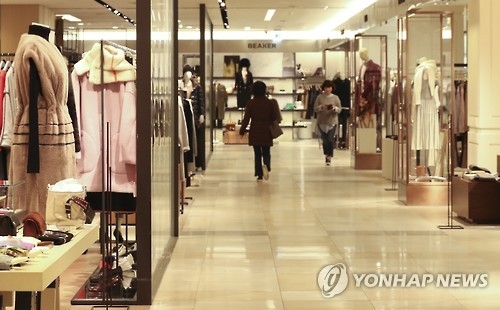 The stagnant figures have led some analysts to compare the domestic circumstances with those in Japan. Sales at Japanese department stores fell for 16 consecutive years beginning in 1997. By 2012, sales had been reduced by 34 percent, forcing bankruptcies and mergers.

"The years of sales stagnation are due to falling consumption," said Hong Joon-pyo, who analyzes market trends at Hyundai Research Institute. "The slump in domestic demand is not just from one-time factors like the Sewol ferry sinking and the Middle East Respiratory Syndrome (MERS) but is also linked to population and social changes, which is why the stagnation could turn long-term like in Japan," he said, referring to the Sewol tragedy in April 2014 and the MERS contagion in 2015 that had hit local consumption hard.

The working age group will start growing smaller this year due to the low birthrate and the aging population, he said.

"This means that the group that earns income by working hard and spends it at department stores is getting smaller," Hong said.

Professor Kim Hyun-chul of Seoul National University Graduate School of International Studies noted that department stores are hit directly the most when economic growth is slow.

"Chances are high that like Japan, which experienced a long-time slump of 20 years, South Korea's department stores will experience falling sales for a similar period of time," he said.
(END)