"There are growing concerns over an increase in consumer prices being felt in the markets," Finance Minister Yoo Il-ho said in a meeting with officials in Seoul. "We will concentrate our utmost efforts on stabilizing prices of agricultural products and processed food."

His comments came as prices of agricultural products and processed food have recently increased ahead of the Lunar New Year holiday next week, putting burdens on ordinary consumers. 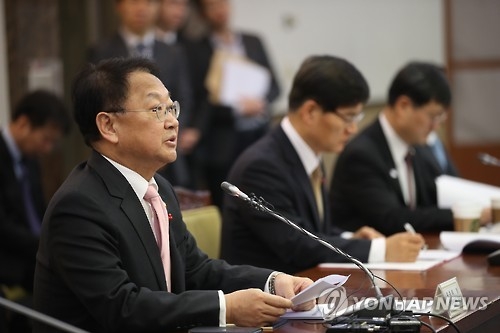 Yoo also said South Korea will try to diversify imports of fresh eggs over concerns that egg prices could remain high due to the massive culling of egg-laying hens following the bird flu outbreak that hit the country mid-November.

South Korea has imported 3.77 million tons of fresh eggs from the United States without tariffs under the temporary measures meant to control the soaring prices of eggs. The measures are set to expire on June 30, though the government has said it will later decide whether to extend the temporary lifting of tariffs.

South Korea also said it has shortened the quarantine and inspection processes for fresh eggs from 18 days to eight days while pushing to bring forward an import of 130,000 egg-laying hens from either the U.S. or Spain in the first half of this year to ease the egg shortage. South Korea has so far imported egg-laying hens from the U.S. in the second half of year.

South Korea has been suffering from a shortage of eggs as its quarantine officials have so far slaughtered more than 32 million poultry -- 23 million of those being egg-laying hens -- to contain the bird flu.

Yoo said agricultural product prices could be stabilized in coming months due to an increased cultivation area of vegetables that will hit the markets in spring.

The government said it will ensure that 2,000 tons of cabbage -- a key ingredient of the Korean traditional side dish of kimchi -- will hit the shelves before mid-April.

Still, Yoo said he expects the prices of refinery and processed goods to continue to rise for the time being due to rising raw material costs.

The minister also said the government will sternly deal with possible price collusion in processed goods while closely monitoring the prices of such goods in cooperation with civic groups.

Furthermore, the government said it will freeze city gas prices this month to help relieve the financial burden of the general public this winter. 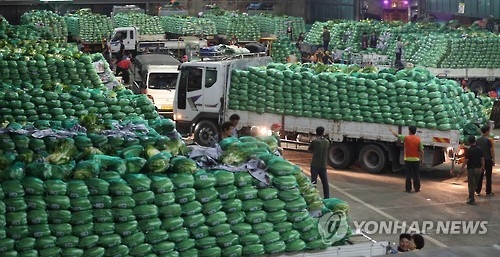