The former Democratic Party head received 28.1 percent in support, up 2 percentage points from the previous week in the survey by RealMeter. Ban fell 0.4 point to 21.8 percent.

The former U.N. head has been seeking to expand his political presence after returning home last Thursday by visiting different areas of the country, but also faced increasing attacks from the opposition bloc.

Seongnam Mayor Lee Jae-myung remained in third with 9 percent, down 2.7 points. It marked the first time in 10 weeks for his score to fall to the single digit territory. He was followed by Rep. Ahn Cheol-soo of the minor People's Party with 7.4 percent.

South Chungcheong Gov. Ahn Hee-jung of the Democratic Party and Acting President and Prime Minister Hwang Kyo-wan, who was newly included on the survey, tied with 4 percent.

By party, the Democratic Party topped the poll with 37 percent, trailed by Saenuri with 14.1 percent and the People's Party with 11.3 percent.

The poll was conducted with 1,507 voters between Monday and Thursday with a margin of error of 2.5 points. 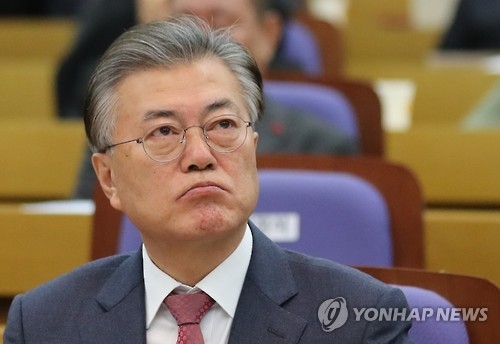