SEOUL, Jan. 19 (Yonhap) -- South Korean political thriller "The King" has topped the local box office on its opening day, with a score well over that of "Confidential Assignment," data showed on Thursday.

According to a box office tally from the Korean Film Council, "The King," starring actor Jo In-sung, had accompanied 288,972 moviegoers on its Wednesday release. This marks the biggest opening score for homegrown films that have been released in January. 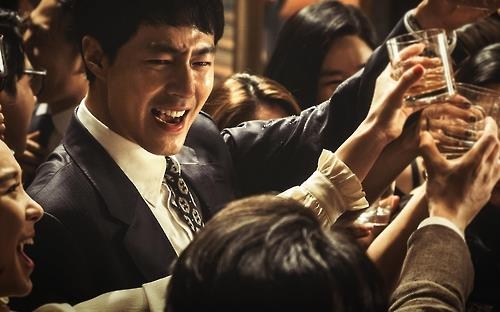 The movie, which marks Jo's first film after his 2008 movie "A Frozen Flower," unfolds as prosecutor Tae-soo, played by Jo, who dreams of obtaining absolute power, meets Han Kang-sik, played by Jung Woo-sung, a senior prosecutor and the puppetmaster behind the country's politics.

The crime flick, directed by Han Jae-rim of the 2013 hit historical film "The Face Reader," had been applauded for its incisive satire on the society of the authorities.

The action film, which has Hyun Bin in his latest silver-screen role after the 2014 movie "The Fatal Encounter," tells the story of two cops from South and North Korea who team up for a joint covert operation to hunt down a North Korean criminal ring that has sneaked into the South.

The Japanese romantic fantasy animation "Your Name," which had retained the local box office throne for two weeks, fell to third place with an accumulated viewer count of 2,738,251. The record, facing its eminent 3 million milestone, is likely to bring the animation director Shinkai Makoto once again to the country, as he previously revealed plans to revisit South Korea if the film summons over 3 million cinemagoers.

'The King' opens at No. 1 beating 'Confidential Assignment'

'The King' opens at No. 1 beating 'Confidential Assignment'