SEOUL, Jan. 19 (Yonhap) -- Two South Korean football clubs have been forced to reorganize their plans for the 2017 season following the Asian club champions' ban from their title defense over a bribery scandal.

The Entry Control Body (ECB), a judicial body independent of the Asian Football Confederation (AFC), said Wednesday that Jeonbuk Hyundai Motors are banned from this year's AFC Champions League due to a bribery scandal, considered an act of "indirect involvement in activities aimed at arranging or influencing the outcome of matches."

Last year, one of Jeonbuk's scouts was convicted of bribing referees in 2013. They were docked nine points by the K League's disciplinary committee and were fined 100 million won (US$84,900).

Jeonbuk won the AFC Champions League (ACL) in November by beating Al Ain of the United Arab Emirates and secured their spot for the 2017 edition by finishing second in the K League Classic.

Under the rule, Jeonbuk have been barred from AFC competitions for one year, but the two-time continental champions will take the case to the Court of Arbitration for Sport (CAS), the world's top sports tribunal, to challenge the ECB ruling.

The latest decision by the ECB will see Jeju United take Jeonbuk's place in Group H, where they will have to face Adelaide United of Australia, Jiangsu FC of China and a playoff-winning team to be determined next month. Jeju previously had an ACL playoff spot after finishing third in the K League Classic.

It also means Ulsan Hyundai, fourth last year in the domestic league, will enter the playoff in Jeju's stead. The K League side will meet the winner of another playoff match between Kitchee SC of Hong Kong and Hanoi FC of Vietnam. If Ulsan win their contest, they will enter Group E against Kashima Antlers of Japan, Muangthong United of Thailand and another playoff-winning team. 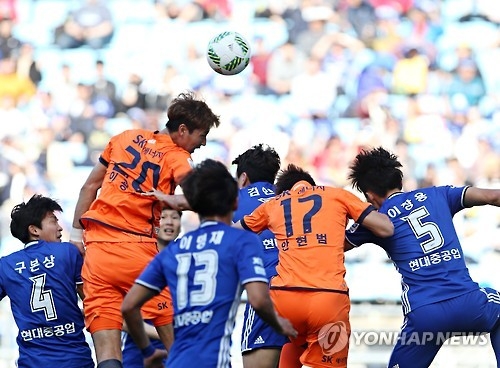 Both Jeju and Ulsan said they will have to change their preseason plans.

Ulsan have set up their offseason training camp in Murcia, Spain, and were supposed to stay there until Feb. 10. But they now plan to return to South Korea about 10 days earlier than scheduled, since their playoff match is set on Feb. 7 at home.

"We are happy to enter the ACL, but there are lots of things to think about," Ulsan general manager Kim Kwang-guk told Yonhap News Agency on Wednesday via phone. "We have to shrink our overseas training programs, but I believe we can pass the playoff round with our existing players and current roster."

Kim said Ulsan have yet to finalize foreign player signings and will have to speed up the process. The 2012 ACL winners have been busy trying to build up the team under new head coach Kim Do-hoon.

"We have to play the match next month, which means our foreign recruitments will have little time to work with existing players," Kim said. "We will probably have to play the playoff match with just our local players."

Jeju said they will not change their offseason training schedule. The team departed for Thailand on Jan. 4 and will return home next Wednesday.

The club officials, however, said they will have to make adjustments to their training programs that were originally designed for the Feb. 7 playoff match. After taking Jeonbuk's place, Jeju's first ACL match will be on Feb. 22 against Jiangsu.

Jeju also have to start analyzing opponents in Group H instead of teams in Group E.

"We are heading directly to the group stage, but it's inevitable for us to change strategies," the club said in a statement. "We also think the difficulty of passing the group stage got higher because we have to travel to Australia, while the playoff-winning team is likely to be Gamba Osaka of Japan."