The clip takes the viewers to a bar and a bowling alley where the singers dance to an upbeat, soul-influenced pop track. The song is heightened with the trendy and catchy playing of an 808 bass and saxophone instrumental.

According to Mystic Entertainment, the track is generating an explosive response, ranking high on several local streaming services just after its release at the stroke of midnight. The song instantly took the 2nd spot on Mnet and 3rd on Olleh Music.

The vocalists are widely recognized for their outstanding singing abilities. Luna and Solar are the main singers from their respective groups, while Hani has come under the limelight with her singing prowess on the MBC music competition program "King of Mask Singer."

"Honey Bee" is part of the eminent producer Park Geun-tae's music project that began last year, which focuses on releasing brand new singles as well as remakes of past hits. He rose to fame for producing widely recognized songs including K-pop idols Suzy and Baekhyun's hit duet song "Dream," Eddy Kim's "My Lips Like Warm Coffee" and 10cm's "I Really Like You," among others. 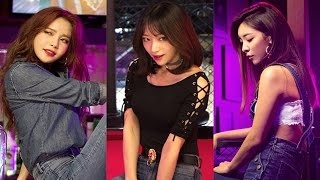