Hwang made the remarks amid growing concerns that the communist state could engage in provocative acts to influence the presidential election in the South or attract the attention of the incoming U.S. government slated to take office on Friday (Washington time).

Pyongyang has recently said that it can launch an intercontinental ballistic missile (ICBM) "at any time from any place," and that it is close to mastering the technology for a missile capable of striking the U.S. mainland.

"Chances are high that North Korea can undertake various military provocations to disrupt the strong international sanctions leveled against it and to probe our government's readiness posture," Hwang said. 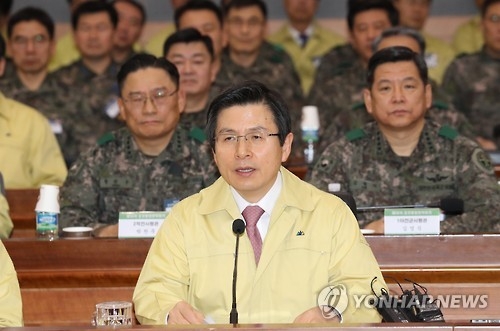 "North Korea's cyberattacks are getting smarter and improving, and it is expected to carry out online attacks in connection with the domestic political events (in the South), such as a presidential election," he added.

Hwang also called for close cooperation among civilians, the government, the military and police to counter all manner of security threats.

"The military should closely monitor the possibility of North Korean provocations and maintain a posture to strongly retaliate if provoked," Hwang said.

The acting president also stressed the need to develop concrete plans under which central and provincial governments can cope with national emergencies, including natural disasters. He, in particular, cited the U.S.' National Response Framework as an example of a coordinated response by the state to disasters.