SEOUL, Jan. 19 (Yonhap) -- Samsung heir Lee Jae-yong got back to work instead of going home Thursday after staying overnight at a detention center as a local court rejected an arrest warrant for him over alleged bribery, embezzlement and perjury.

Lee awaited the outcome at the Seoul Detention Center as the Seoul Central District Court deliberated for 15 hours on the legitimacy of the warrant. A special counsel had sought to detain him over his alleged role in the influence-peddling scandal that led to President Park Geun-hye's impeachment in December.

"It is just a normal work routine rather than showing off," a Samsung official said. "Vice Chairman Lee reported to the office after being released (from the detention center) at daybreak today and presided over a meeting with senior officials of the Future Strategy Office for about an hour."

Lee, vice chairman of Samsung Electronics Co., then normally returns home for a while before getting back to work later in the day, the official said, referring to the case in which Lee reported to work as soon as he finished undergoing a 22-hour interrogation overnight by the independent counsel last week.

Two other Samsung top executives, Chang Choong-ki, head of the Future Strategy Office that supervises the group's key business decisions, and Choi Gee-sung, a vice chairman, did the same recently after overnight interrogations by prosecutors.

Observers say Lee apparently wanted to let his business partners know he was still running the world's biggest smartphone and memory chip manufacturer in a business-as-usual manner despite the ongoing probe of the company by prosecutors.

The 49-year-old might be also displaying his physical strength as he is well known for taking good care of his health, they said. 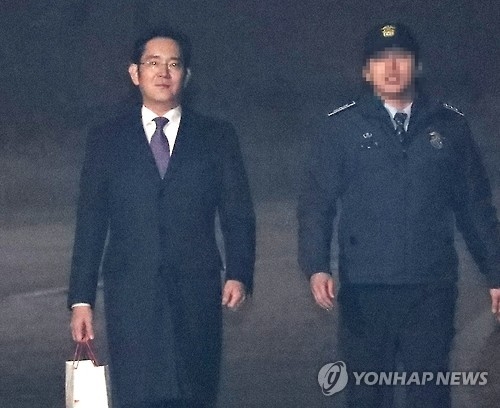 Lee Jae-yong goes to work, not home, after overnight stay at detention center

Lee Jae-yong goes to work, not home, after overnight stay at detention center